You won’t want to miss this 6-minute video of our Beloved Brutus competing in the Mascot National Championships! Created by Monique Bowman and narrated by Sudzy Steyn (Brutus Buckeye, 2013- 2015), The Brutus Brigade highlights footage of Brutus in the community as well as preparing for the highly sought after title of #1 Mascot. You get up close and personal with the Brutus coaches and current team members. A 5-star must see! If you love Brutus, you will love this video. 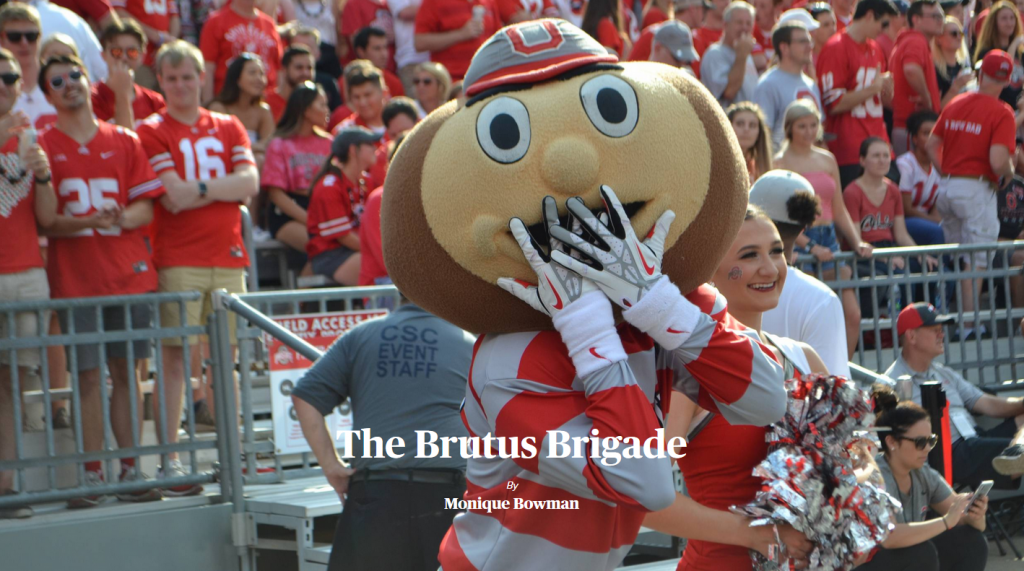 After not making the OSU Football Team as a kicker, Ante became Brutus Buckeye and was able to show off his kicking as well as his many other talents, elevating Brutus to a new level!

BRUTUS HAS A HEART 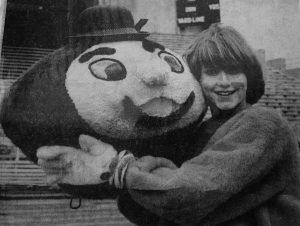 ​In her recent time off from her career as a flight attendant with American Airlines, Mary Burnett Brown, Brutus 1981-82, took a writing course, created a website and published a book of poems based on the series of poems she read to her Instagram audience (@marybrownsheartpoetry). Mary appropriately calls herself the “Heart-Opening Warrior.” Congratulations, Mary!

​This is a put-a-smile-on-your-face, under-60-second quiz. In just four questions, learn which Brutus you are most like. Turns out I’m most like the 1980’s Brutus even though I was involved with the design and painting of the two on the left, created in 1965. The second, fiberglass, was active until 1977. The fourth Brutus is out of order. It was #3, but short-lived. The first Woody ball-capped Brutus appeared at games until 1981, when a feminine Brutus (not pictured) spread good cheer with Dum Dum lollipops. By 1982, the second from the right Brutus entertained fans until the Brutus of the modern era, far right.

Brutus History on the Web and TV

The staff at OSU Archives were a blessing to work with when I was researching the evolution of Brutus for The Autobiography of Brutus Buckeye. I encourage everyone who has personal Brutus memorabilia to plan to donate it to the Archives when they are ready to part with owning it.

Brutus Through The Years

The first of two great photo summaries of the evolution of Brutus! Some of the early pictures are the same in the 2013 and 2015 versions, but the dialogue is slightly different. For example, I’m listed as Sally Huber in one and Sally Lanyon in the other. The 1965 photo is one of the few shots of the papier-mâché model taken by the media. This is before he was named!

Brutus Buckeye: The history of the biggest nut in college football

Kevin Landers, reporter for 10TV in Columbus, and his CBS affiliate reporters throughout the country, did a series of interviews in 2018. The series features Brutus alumni Keith Burkes, Sandy Glowacki Foreman, Emily Moor Williams, Dave Hocevar, Alan Kuntz, Mike Caporal and myself. Fun facts and photos! Thanks, Kevin, for orchestrating it!

“Sally Lanyon had no idea her creation would become a legendary entity, but that’s exactly what happened.”

I grew up near the 1812 Blockhouse and Johnny Appleseed monument in Mansfield, a city whose population is about half the number who fill the ‘Shoe for a home game. Their new online magazine featured my October 3, 2019 book signing at Main Street Books, a delightful place to spend an afternoon perusing bookshelves and admiring the literature-related murals.

Birth of a Buckeye

Ohio Magazine captures some of the story that wasn’t included in The Autobiography of Brutus Buckeye. The photo is a fun one because Brutus’s head is so large that when he hugs you, your head gets squished. The event was the Pi Beta Phi Founders’ Day in Columbus in 2014 when about 10 of us who were initiated in 1964 came back to receive our Golden Arrows. Brutus surprised me for this reunion! He ran across the room in slo-mo to sweep me up in his arms. Brutus doesn’t speak, of course, but I could feel him sighing, “Mom!”

The OSU Archives, so instrumental in providing photos for The Autobiography of Brutus Buckeye, also collects oral histories. Here’s one they did with Ray Bourhis and me in 2014 sharing our memories of the creation of Brutus in 1965. I chuckle at how Ray and I don’t always have quite the same memories!