How Brutus Got His Name 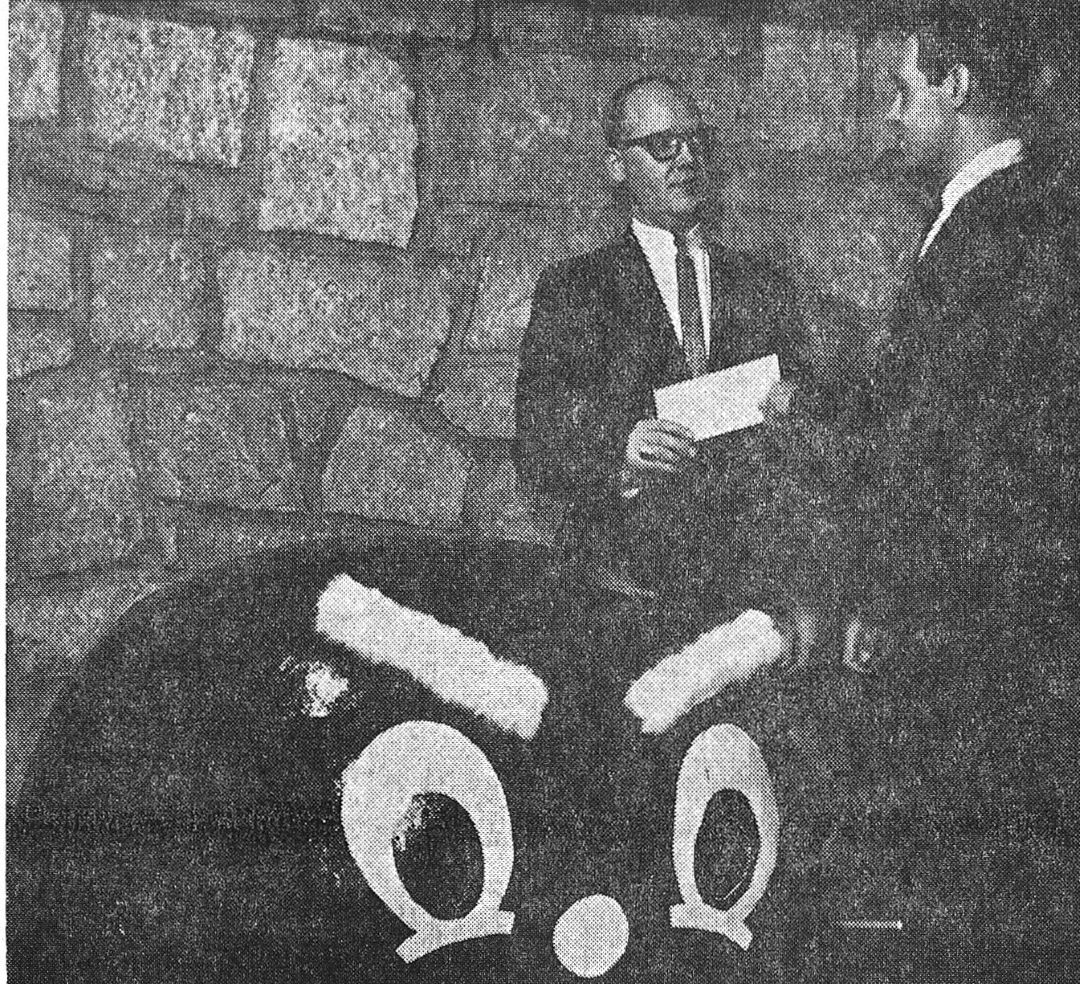 Letters to The Lantern, Tuesday, November 30

“Editor, If I didn’t know better, I would say the contest to name the Buckeye mascot was held by the University of Michigan. Really, how in the world did a name like Brutus win the contest?”

Shute has a solid argument. His letter to the Lantern editor calls out two Romans named Brutus. We know Marcus Junius Brutus, the one immortalized by Shakespeare’s “Et Tu, Brut?,” Julius Caesar’s dying words as he recognizes his former friend among his assassins. The other, Lucius Junius Brutus, founder of the Roman Republic nearly 5 centuries earlier, feigned idiocy to thwart off his own assassination, thus earning the nickname Brutus “the imbecile.” Shute wrote, “In light of these facts, do we want our mascot to be named after an assassin or a coward?” Shute closed his letter with the suggestion of a more positive Bucky Buckeye, which I will clear up later in the blog.

Rather than name the mascot we created, Ray Bourhis and I favored a campus-wide contest to help solidify and spread acceptance of the blue-eyed, smiling papier-mâché Buckeye nut worn by cheerleader Mike Caporal when he walked on the field at half-time of the October 31, 1965, Homecoming game against Minnesota. A provisional Ohio Staters’ member, Bourhis worked with the men’s honorary on the naming contest as well as funding $250 for the more permanent fiberglass version.

A front-page article in the Friday, November 12, Ohio State Lantern, invited readers to submit names through November 18. As I recall, we also posted flyers on campus bulletin boards. The first – and only – prize was a $50 gift certificate from the local Union department store. In those days, when I was pulling down $1.35 an hour working on campus, $50 was an attractive incentive! 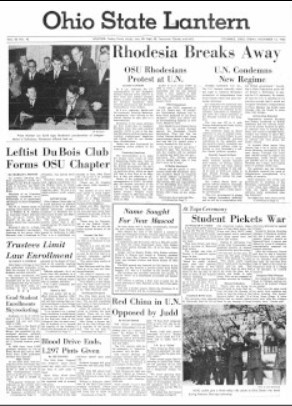 Ray and I were special, non-voting, guests at the proceedings in the wood paneled room, which must have been in the Faculty Club. Mike Caporal was sitting outside the “jury” room. As he recalls, Faculty Advisor Beanie Drake came out to him to see if he agreed with the final selection.

The entries list, prepared by Ohio Stater H. Mike Hill, contained 69 names submitted by 114 people. Just the nominated mascot names were listed. The list of who had submitted the names was separate and secret. Printed on Ohio Staters stationary and dated Nov. 18, 1965, the list of nominations is fun to read.

A few entries favored spelling words backwards: Esats, Eyekcub, and Ydoow. These were too tricky to last long in the pool of candidates. Two erudite botanical entries were Bacchus (the Roman god of vegetation) and Pesky Esky (from Aesculus–the genus that includes the buckeye tree). On the other end of the spectrum, several names drew from cartoons or nursery rhymes: Bozo, Wee Willie Buckeye and Humpty. Four that I categorize as “Really–Who Would Submit That?” are Sam, Nut, Flashy and Mascoty.

Woody Hayes was coach at the time. His name showed up six times: twice as Woody and once each as Ydoow, Haywood, Uncle Woody and Woody, Jr. A gallant try was made with Otis Sylvester Ulysses — there has to be some merit in creating an OSU acronym! Other passes at tradition showed up in Beanie (presumably for popular faculty member Beanie Drake), Sloopy, Carmen Buck and Buckhio.

Bucky was clearly the most frequent entry, coming in with 29 variations. (And, yes, disturbingly, I have non-alumni friends who still refer to me as the creator of Bucky Buckeye.) The entries included 10 submissions for Bucky, 8 for Bucki(e), 2 each for Bucky the Friendly Buckeye and Lucky Bucky, and one each for Buck-E, Big Buck, Big Bucky, Baby Bucky, Bucky Brawn, Bucky Gray and Buckingham. I include Buckingham because that is the formal name of Bucky Badger of Wisconsin. Which brings me to the point that you can’t have the Ohio State mascot sharing a name with another Big Ten team. Or with Bucky Beaver, the Ipana toothpaste mascot so popular in the 1950’s for teaching kids how to brush their teeth properly. So, no Bucky however you spell it.

Where does that leave us? At Brutus, of course. But not so fast. Entry #54 just said Brutus and Entrys # 11 and # 38 were Bucky the Friendly Buckeye and Burtram the Buckeye. When the contest winner was announced, it mysteriously came out as Brutus the Buckeye. And the winner was, drum roll, Arts student Kerry Reed of Dublin Ohio. Not only did he get that $50 gift certificate, he had his photo in the Lantern article announcing the winner.

Reed’s photo is with the fiberglass version, which shows my masterful (please no raucous laughter) job of painting the eyes and button nose and putting the cottony sticks on dowels for moveable eyebrows. If you look carefully, you can see the viewing holes in the irises. I’m told by early wearers that the holes did not match up with their own eyes, making navigation difficult.

In an interview with the Lantern, Reed reported he “chose Brutus because it means ‘heavy.’” The Lantern reporter added Webster-based evidence that Brutus also means “foolish” or “insensitive,” which they accused the contest committee of being since they could hardly represent the voice of the student body with only two students on the six-person judging committee.

SUBSEQUENT LETTERS TO THE LANTERN

Two Letters to the Lantern Editor appeared on Friday, December 3. In letter #1, Vet Med student Douglas Coatney had some valid criticisms of the mascot for while being cute, could only walk slowly around the track and wasn’t around for the second half of the Iowa game. (Guess he never tried carrying an estimated 50 pounds for four quarters.) Coatney’s key complaint was the name Brutus: “Try to imagine Block ‘O’ calling for our mascot and sounding like a funeral procession—Bruuutus, Bruuutus!” Coatney closes his letter with “I hope that the name was chosen because it was liked and not purely on the basis that the submitter of the name is a member of the Ohio Staters.” He had a point there—Kerry Reed was an Ohio Stater member.

Coatney’s words were followed by a short, but revealing letter submitted by two Education students, Joan Adler and Sheila Smith, who called themselves enthusiastic Ohio Staters — not the organization Ohio Staters, Inc., which was all male at the time. They compiled over a dozen names they thought would be worthy of consideration for the mascot. Adler and Smith asked, “What is the validity of a contest in which Brutus the Buckeye wins and Brutus Buckeye fails? Did anyone read our entries? For lack of an article (the) we lost.”

WHAT ABOUT THE “THE”?

Let’s go back to the ballot again. “Brutus Buckeye” was not listed, nor was “Brutus the Buckeye.” Just “Brutus.” Since I wasn’t taking notes and my memory is only of vague impressions, I don’t know the “real truth.” I can imagine that perhaps the committee liked the cadence of Burtram the Buckeye, but preferred Brutus to Burtram.

Whatever happened, the winning entry of the Name the Mascot contest was published as “Brutus the Buckeye.” As time went on, “the” was dropped. Perhaps it is the parent in me, but I prefer his full given name and resist calling him Brutus Buckeye.

And explain, please, why “the” was dropped from Brutus “the” Buckeye and added to “The” Ohio State University.

Photo Permissions:
Used with permission of The Lantern, the student voice of The Ohio State University; Sally Lanyon ballot photo.