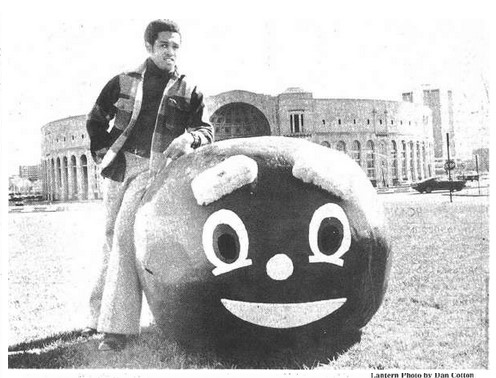 Bell-bottomed pants were all the rage in the 1970’s. Our beloved Brutus the Buckeye was as hip as they come. Despite being confined to the big fiberglass head created in 1966, Keith Burkes brought style from the waist down with his plaid bell-bottomed trousers. But that’s not nearly all that Keith did to advance the fame and notoriety of Brutus.

Keith, an Alpha Chi Rho, tried out for Brutus in his sophomore year. Tryouts consisted of writing a paper on why you wanted to be Brutus and performing a skit in front of a Block O panel. Keith doesn’t remember what he wrote, but it couldn’t have hurt that had been on the track and wrestling teams at Eastland Vocational Center in Gahanna or that he was VP of the Freshman Class at Ohio State. He recalls about 30 other men tried out. Keith says, “I dropped the head a number of times.” The prior Brutus, Jack Tamburello, had been quite a bit taller than Keith. “The harness shoulder straps did not work until I figured out how to criss-cross them.”  Even after he was elected by Block O to serve as Brutus, Keith had problems with falling in the head. He says, “It was kinda hard to see out of the eye holes or the two inch slits on the sides.” 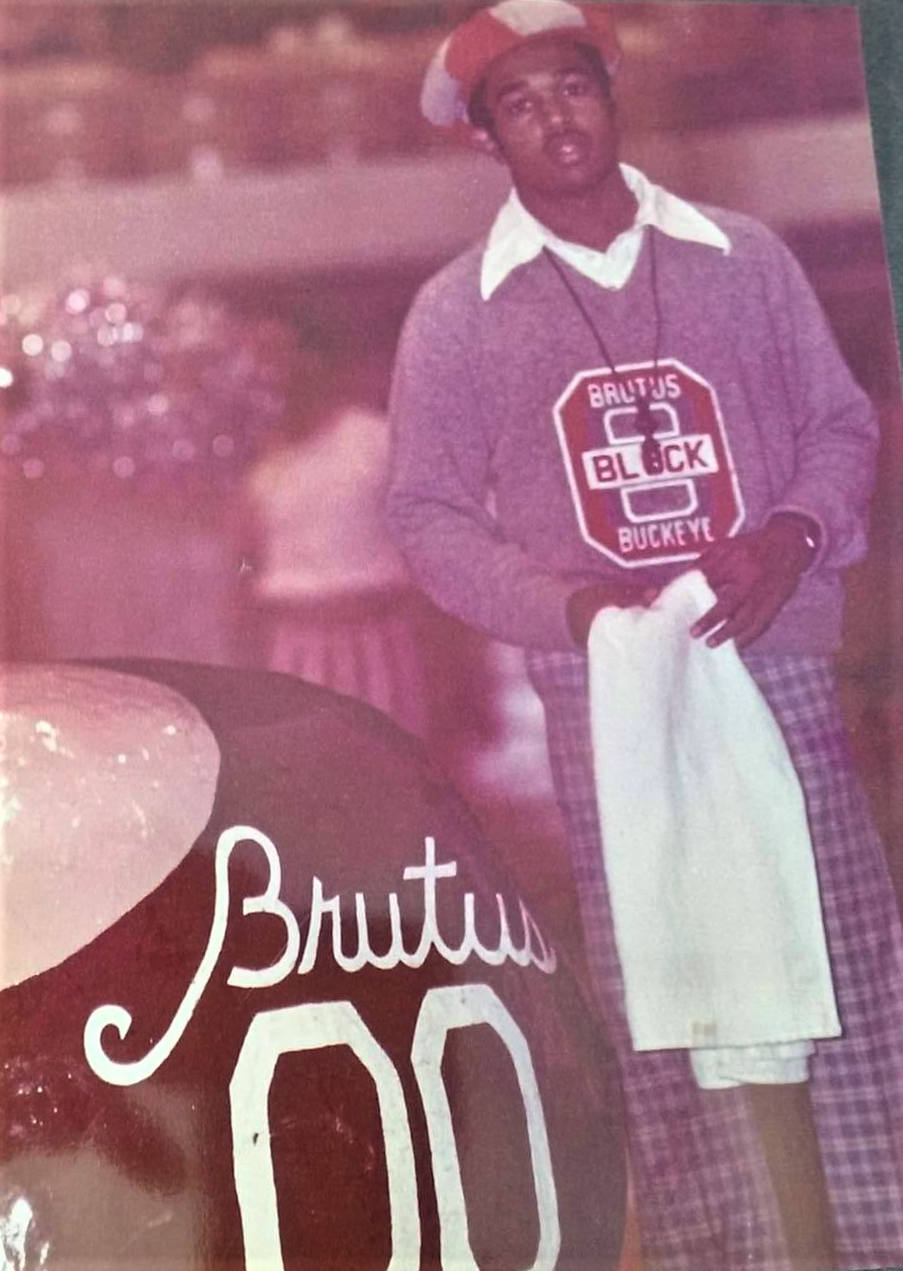 Known as “Brutus’s legs” or the “bottom half of Brutus,” Keith made his own improvements to Brutus, putting fur on the eyebrows and making a bigger smile. He used long screws instead of dowel rods to manipulate frowns and smiles and anger. “Basically during basketball season though,” Keith says, “I left the eyebrows alone. The team wasn’t doing so good.” By his era, “Brutus 00” was scripted on the back of the head and Keith added a towel.

Keith was the first Brutus to run up (okay, maybe lumber) in the stands during football games. He exponentially expanded the role of Brutus from being the football mascot who occasionally attended a basketball game to taking Brutus to 20 basketball games and making other appearances at baseball, ice hockey, track and field, swim, lacrosse and soccer events. Keith had an assistant, Les Cline, who filled in when he couldn’t go to a game. When not being Brutus, Les had a field pass in the ‘Shoe and took photos.

Keith also began making non-sporting event appearances. His first assignment was with President Enarson who asked Brutus to join him in welcoming all new students to campus in January of 1974. Keith later became a regular at Governor James Rhodes’ state dinners at the Governor’s mansion in Bexley where he would walk around greeting people. Though he wore the head there a few times, Keith’s usual attire was his bell bottoms and Brutus sweater. Governor Rhodes, who came to all the football games, loved Brutus so much he made Brutus the “official state nut,” the state symbol of the State of Ohio. 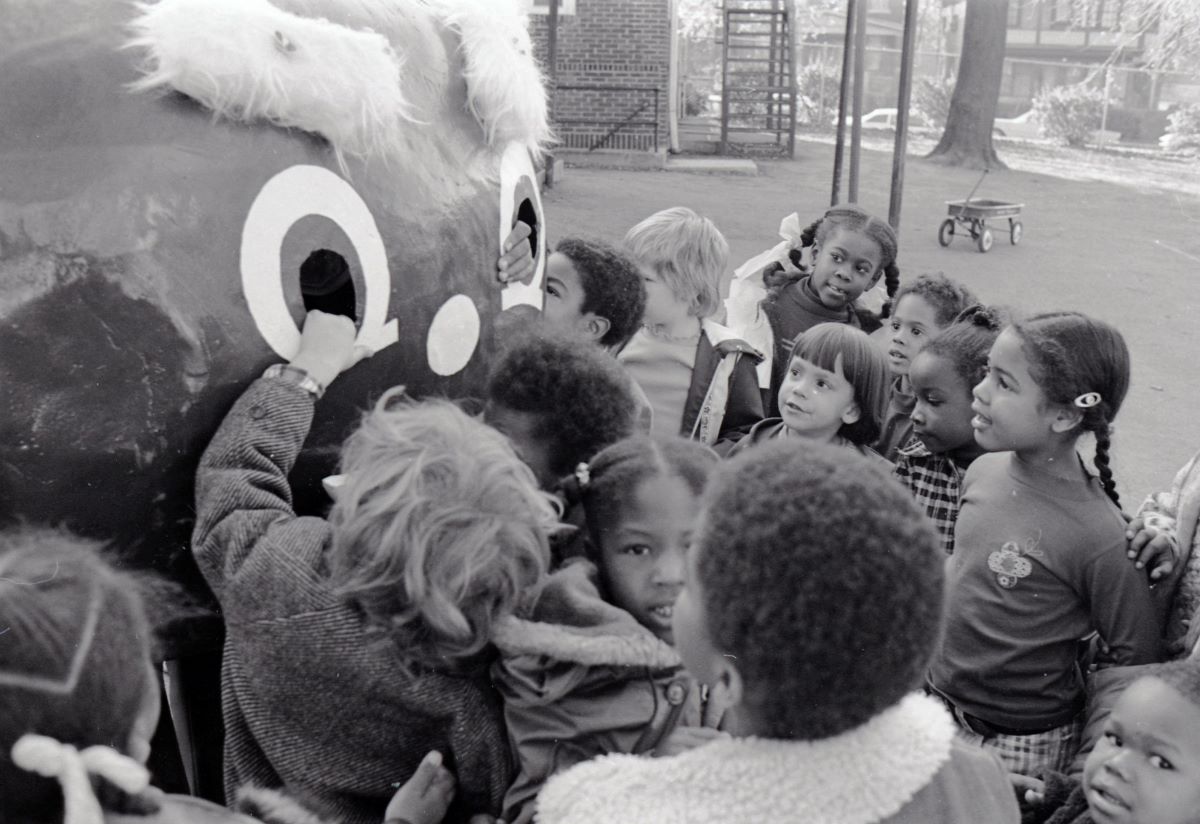 Keith went to county fairs and festivals as Brutus. A favorite fellow celebrity who stood next to Keith in receiving lines was Laurel Lea Schaefer, Miss Ohio, who had become Miss America 1972. Keith also took Brutus to prisons, playgrounds and hospitals. His most memorable visit was to a burn unit to a family of five who were badly burned in a home that didn’t have smoke detectors. Keith says, “I just felt so helpless trying to make them feel like they weren’t in pain.” He did not wear the head, so the family may have noticed that Keith was almost in tears. 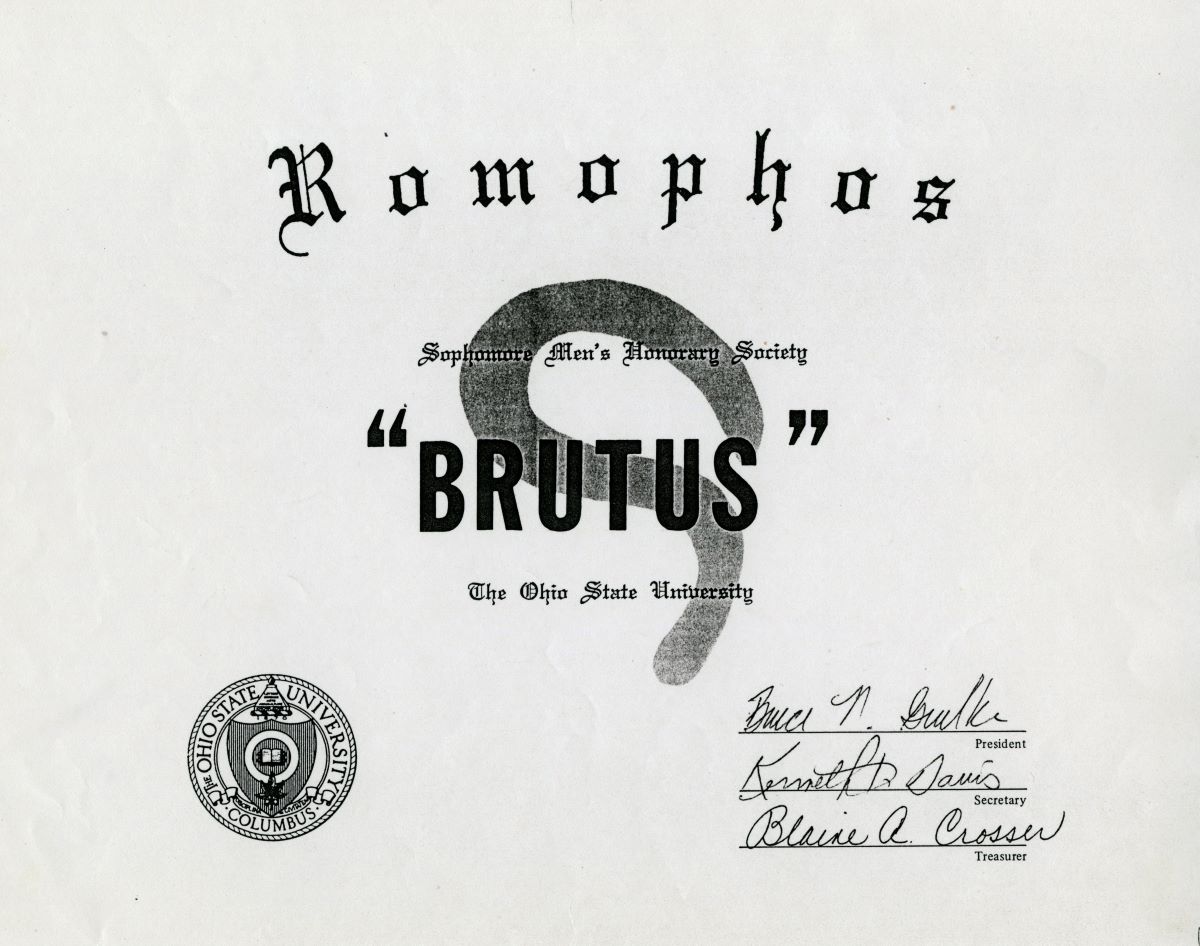 Keith was responsible for Brutus getting inducted into Romophos men’s honorary. Since Keith was already a member, the club members decided to officially honor Brutus. The ceremony included being paddled with the Romophos wooden paddle. Keith says, “It hurt, but I refused to cry.” He adds, “It wasn’t called hazing then.”

Keith had a knack for getting Brutus in the news. When Ray Bourhis and I were researching The Autobiography of Brutus Buckeye, by far the most articles and photos we found came from Keith’s tenure. In addition to multiple Lantern articles, Keith appeared on the front page of a January 1974 Citizen Journal with triplets, in the Columbus Dispatch, and on the magazine cover of the December 17, 1975 Central Ohio Sports Forum for an article titled, “What a Game in Ann Arbor.”  Perhaps a reflection of his being a Marketing and Political Science major! 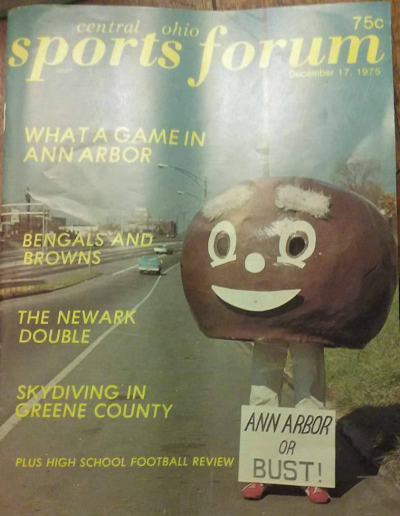 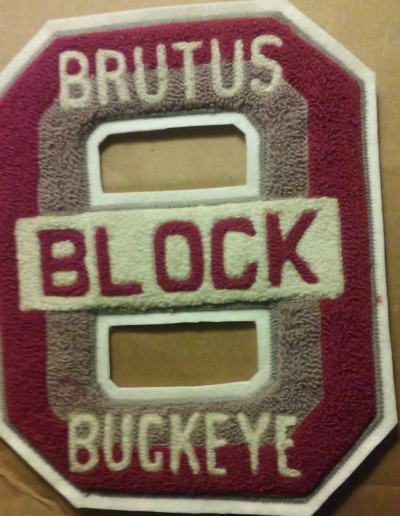 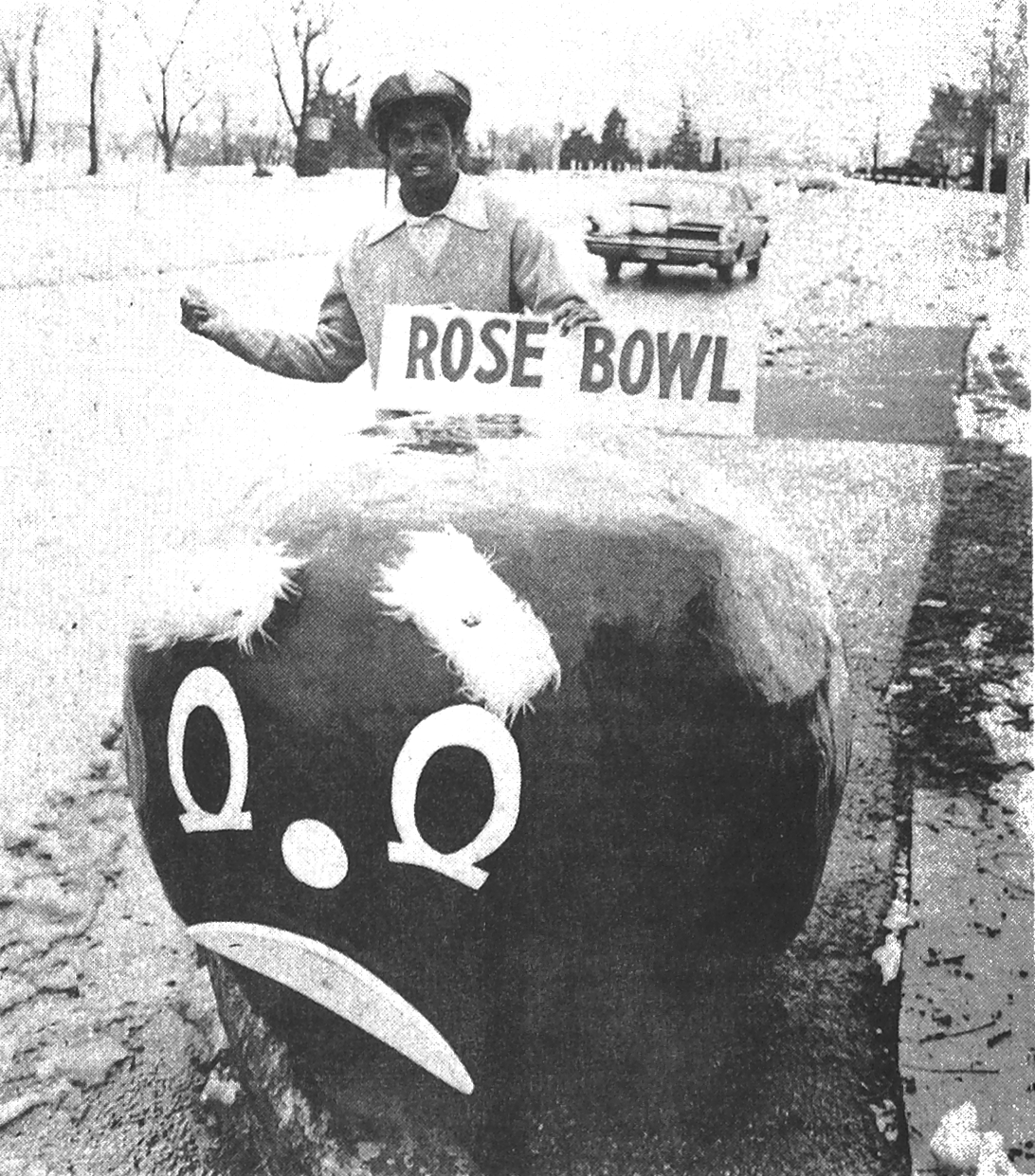 Fame and notoriety expanded with the 1974 Rose Bowl. Keith pulled off a publicity stunt threatening to hitchhike to Pasadena if someone didn’t come up with the funds to send him. They did, of course!

Keith made appearances at Lion Safari, Disneyland, Universal Studios and the Johnny Carson show. He didn’t get to wear the Brutus head on the set, but he did wear his Block O Brutus sweater and his “apple” cap, as he fondly calls it.  His mother would sew the Block O logo onto various sweaters. He wore platform shoes to stretch his 5’3” frame.

Brutus worked under Block O until OSU went to the Rose Bowl in January 1976, then he became part of the Athletic Department at the end of year. Keith’s new “boss,” Assistant Athletic Director Richard Delaney, did not want the Brutus head on the Rose Bowl float because he felt the head was too big and he wanted to emphasize the cheerleaders. Although Keith volunteered to walk beside the float, he sat in the stands instead to watch the parade. 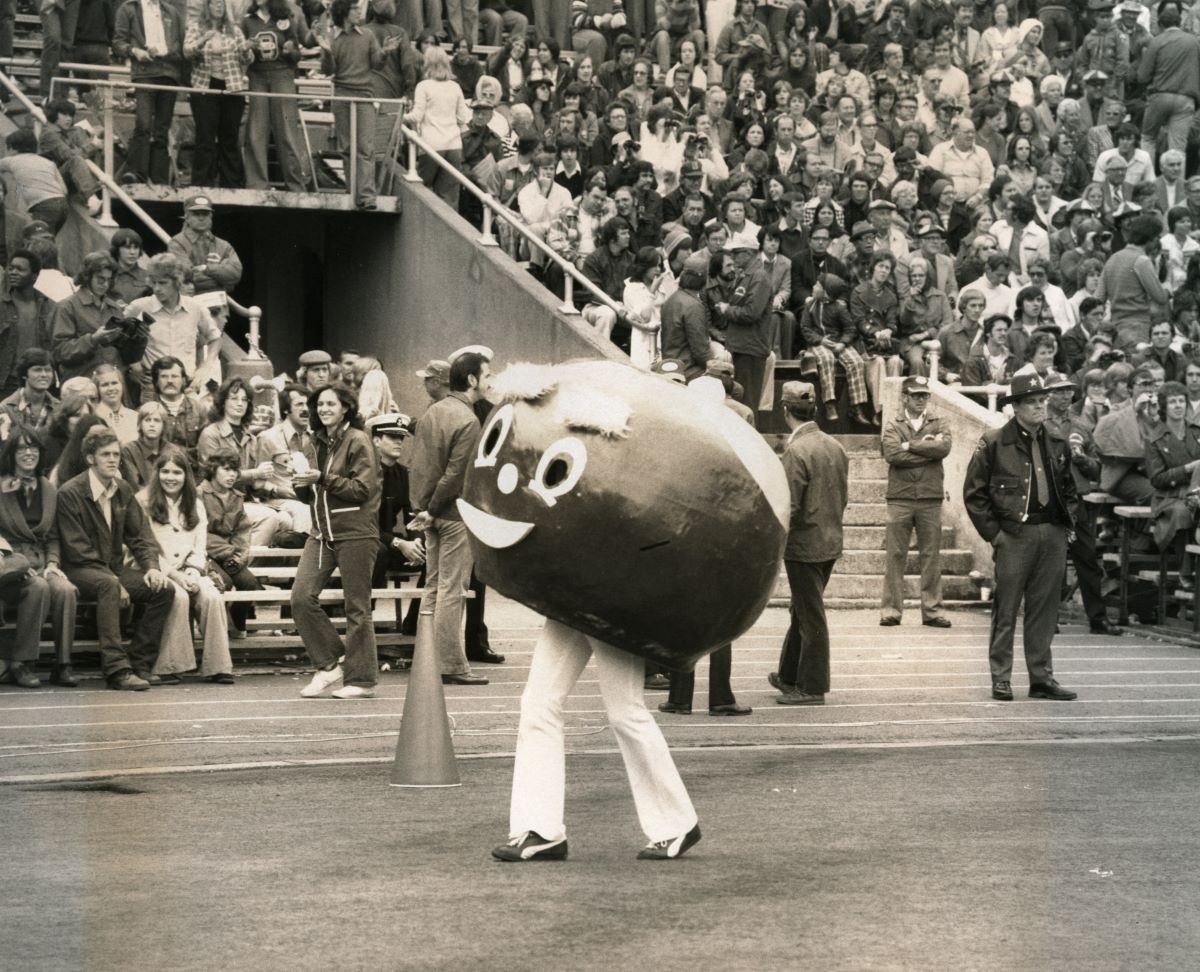 With little official support during that trip, Keith was pretty much on his own for logistics. He rented a car to transfer the Brutus head, which he put on the top of the car and tied down with ropes. “I was afraid Brutus would blow off the top of the car.” Thankfully, he didn’t.

Keith was the last official Brutus to wear the fiberglass head with the button nose and the last to be called Brutus the Buckeye. Richard Delaney, who shortened the name to Brutus Buckeye, had a vision and plan to modernize Brutus to be more athletic. A smaller head would allow more athletic prowess, being able to use arms and legs. As Keith recalls, Disneyland created a new head. When Mr. Delaney showed it to Keith saying, “This is your new costume,” Keith looked at it, replying, “I’m not wearing that thing.” And he didn’t. Keith’s assessment proved accurate. The “new, improved” Brutus was booed off the field on the first outing, then again on the second outing, as Keith recalls, along with letters to the Lantern editor and a newspaper story. There was no mascot at the third game, then the old head was brought out for the rest of the season. Keith is not sure who wore it. 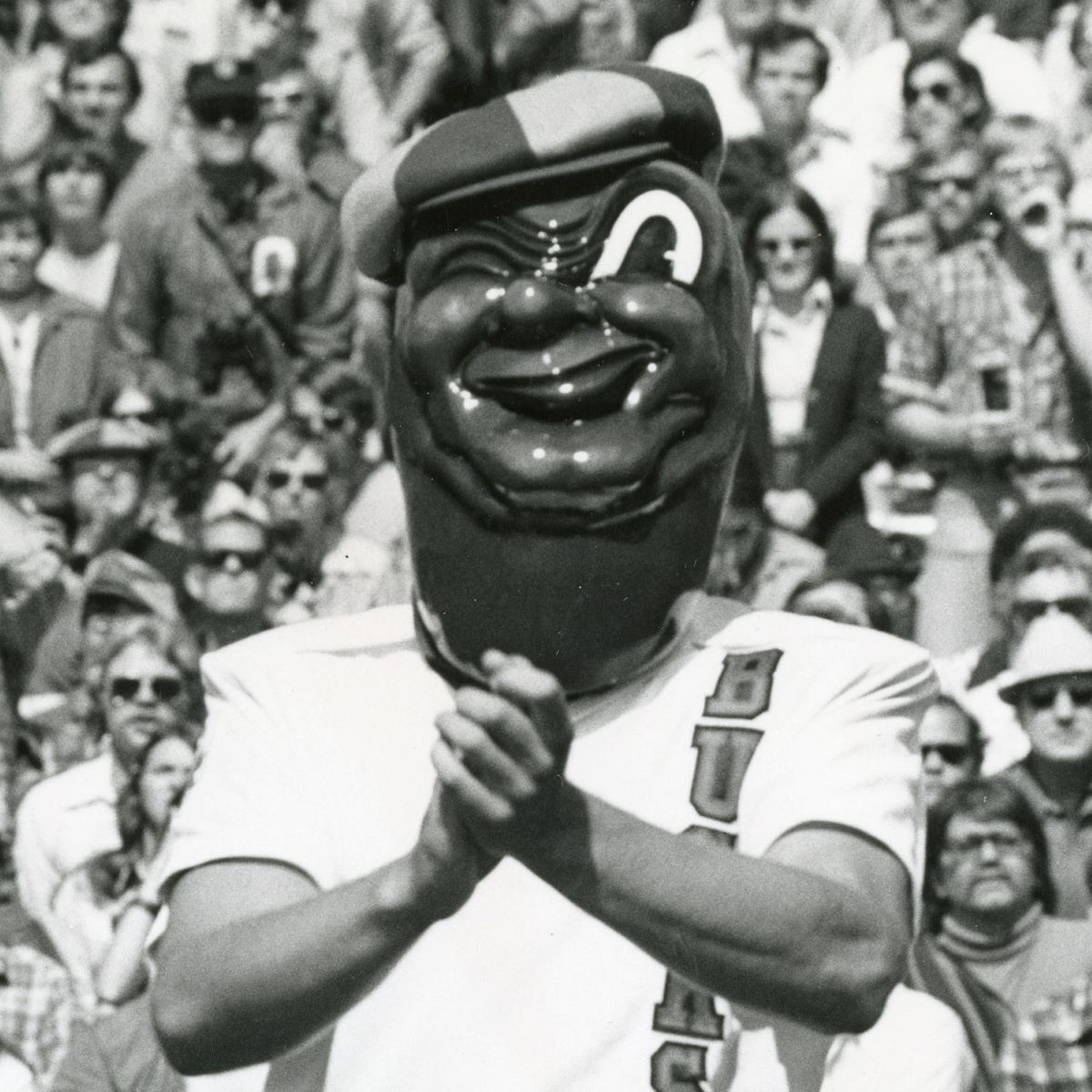 Delaney was apparently determined to move forward with a new Brutus persona. Keith said Delaney had the cheerleaders stomp on the fiberglass head. He ordered it to be incinerated it so “it would never come back,” much to the dismay of the current staff of the OSU Archives who would have loved to display the historic Brutus in the William Oxley Thompson library in their showcase of Brutus memorabilia.

When I asked Keith how he had time to go to all his classes, he said, “I majored in activities.” Indeed he did! Besides Romophos, he was on Dean Mount’s Advisory Board, served as Public Relations Director for the Undergraduate Student Government, was a Peer Counselor for Minority Students, and served as dorm Resident Advisor in Scott Tower.

As it turns out, Keith did not graduate from Ohio State. When President Ronald Reagan fired all the air traffic controllers, Keith leapt at the chance to study to be an air traffic controller. He was hired at Allegheny Airlines which was acquired and merged multiple times and is now part of the American Airlines. He graduated from Troy University while working, not in air traffic, but as a flight attendant for nearly 30 years until his ruptured ears forced him to go on permanent medical leave. He was known as “Brutus” Burkes by his coworkers. 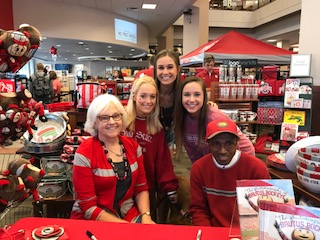 Keith is still majoring in “activities.” On the fun side, he has been the voice of Smokey the Bear at the Ohio State Fair, served as a national judge for the Miss Teen Cities of America Pageant in Orlando and has done book signings with me for several years at Barnes and Noble Campus store where he enjoys the notoriety of having been Brutus #7. On the serious side, he studied for and became an ordained non-denominational minister in 1992 and did consulting under the auspice of Burkes Consulting Services. He served on the board of AmeriFlora, a $95 million event held April to October, 1992, at Franklin Park near Bexley. Keith also did a stint on the State of Ohio’s Department of Health Planning Board representing the Urban League as a prevention specialist. He keeps busy on the House Corporation of Ohio State’s Delta Sigma Pi professional business fraternity, attending Cheerleading/Brutus reunions, and sending messages of love on FaceBook. Keith no longer wears bell bottoms, but still has his “apple cap” and amazing memories of being Brutus.