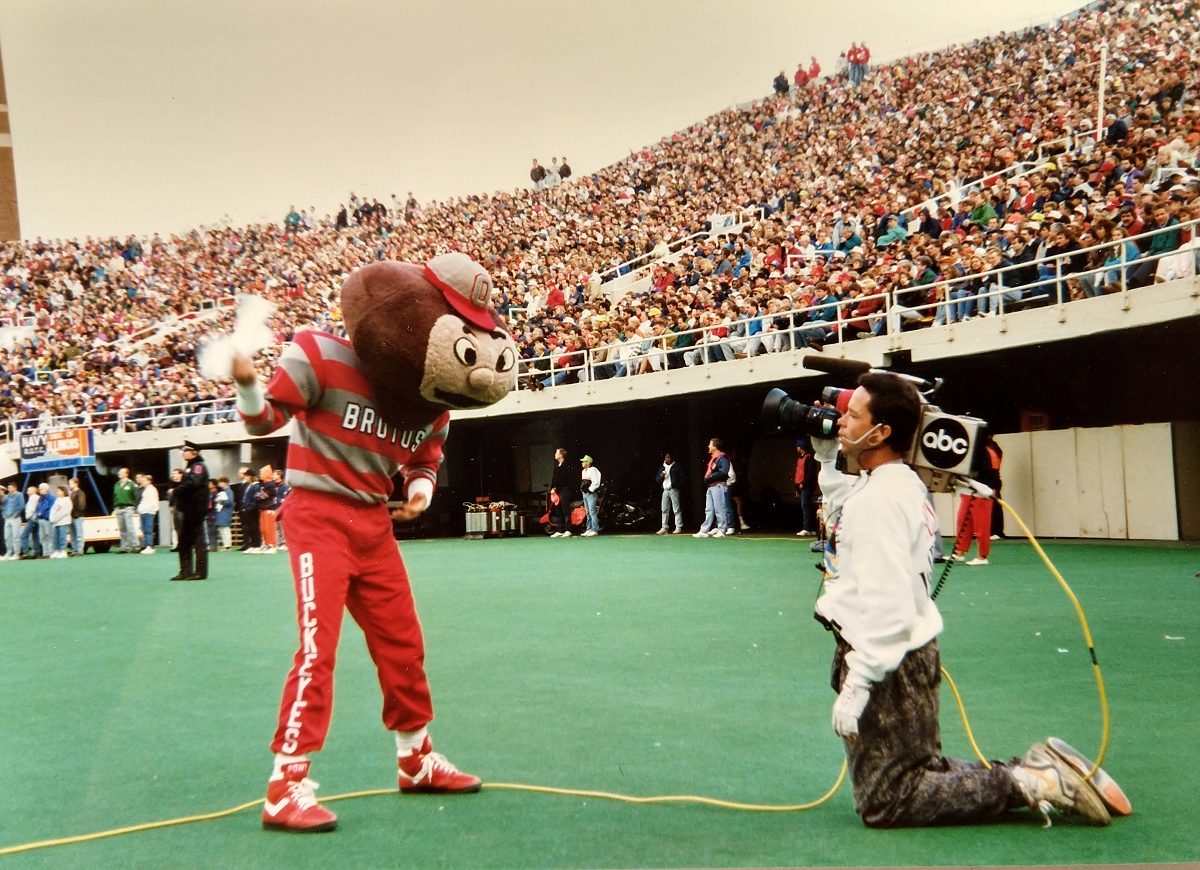 When Brutus was a “teenager” in the early 90’s, he got into a lot of mischief, thanks to Bart Suver. “The most fun prank,“ Bart recalls,  “is when I put on the Brutus suit upside down.” He put the shirt over his legs and stuck his arms in the pant legs and pinned the head between his legs. With his feet in the gloves, Brutus appeared to be walking on his hands. “The cheerleaders died laughing,” says Bart, “and when I did a cartwheel, the crowd went nuts!”

Unfortunately for history, there are no known photos of the upside down Brutus, but there is a grainy photo of Brutus (aka Bart) sunscreening himself at the Hall of Fame in Tampa using an aluminum foil reflector, popular for tanning in those days, and wearing sunglasses. Another photo finds Bart “guilty” of serving up Hawkeye on a platter. Bart loved props! Even when he didn’t have any, he used the Brutus towel as a makeshift prop to wave to ABC cameras after the Buckeyes lost the Illibuck Trophy for the fourth time in row at Illinois. 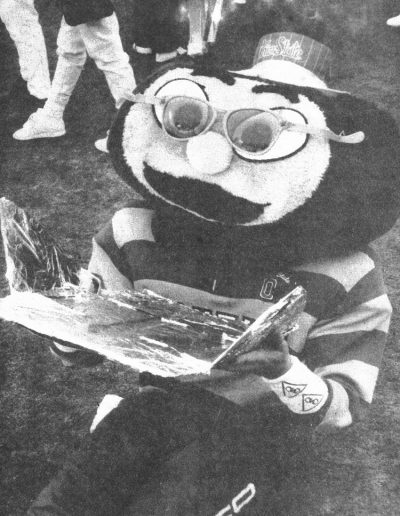 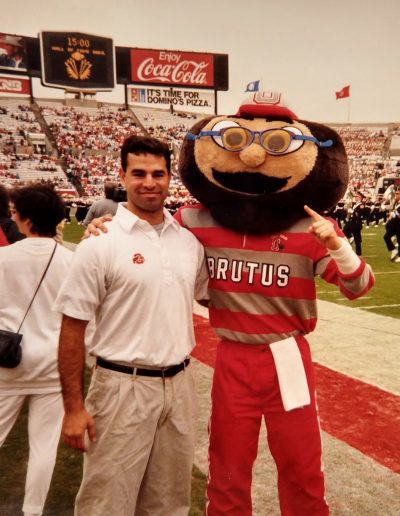 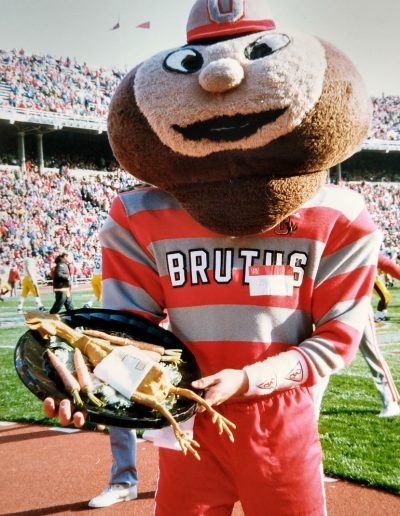 At the Wisconsin game in Camp Randall Stadium, the mischief was not of Bart’s doing, but nearly his undoing. He had been warned to stay close to the cheerleaders because the week prior, Wisconsin fans pulled the Northwestern Wildcat into the stands and spray painted a red stripe down its back. Despite Bart’s efforts to steer clear, Brutus was tackled and “goalposted” by the Badgers’ band. They held him horizontally and pretended to be ramrodding him into one of the goal posts. The prank didn’t end there. Band members wrapped his legs around the goal post and securely tied his shoelaces together. Unable to reach his feet to untie the laces, Bart couldn’t walk. Thankfully, OSU cheerleaders rescued Brutus. 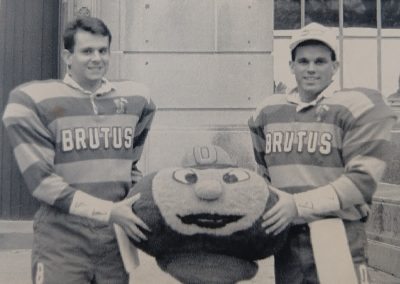 Bart shared the Brutus honors with Doug Congrove. They figured out a way to tell which of them was in a particular photo – Bart reports that “Doug had sausage fingers. Mine were thinner.” By 1990, Brutus had the “00” on the back of his shirt, white wrist bands, white towel tucked at the waist, and red pants, but no gloves. “Ohio State” ran down one side of the pants and “Buckeyes” on the other leg.  Both Bart and Doug wore quarterback pads to help steady the head. Inside the head they used a lacrosse helmet.  Even with those supports, the foam from the inside of the head would rub against their faces. Doug and Bart split the first and second halves of home football games and split up away games so only one had to travel. They also went solo on men’s and women’s basketball and hockey. As reported by Doug in an earlier blog post, the two shared one head. Bart says, “We used lots of Carpet Fresh to try to combat the smells.” He also said that although a second head was created, it was rarely worn.  “It wasn’t crowd worthy due to ‘groggy’ eyes.”

Bart’s favorite times were after Tuesday and Thursday cheerleading practices. He would often go with OSU President Jennings’ wife to the hospital to visit children. “Mrs. Jennings always had a list of patients to see,” he recalls. Bart loved the visits. “It was like you had flipped a switch. They would get so excited to see Brutus. The adults, too!”  Bart says that while in character, they were not to take the head off or to talk, but that he may have taken the head off once or twice for a “patient who was very sick and the door to the room was closed.” 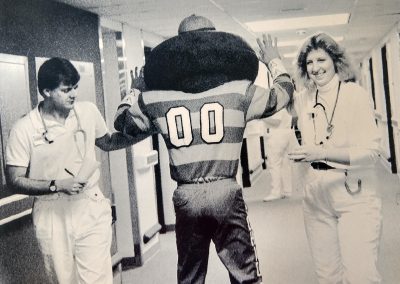 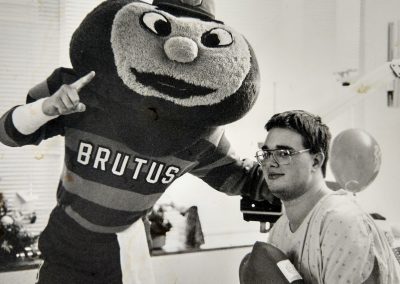 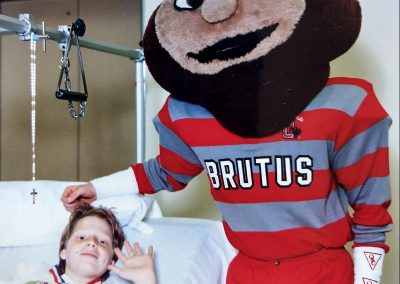 The best thing that came from being Brutus? Without hesitation, Bart says it was meeting his future wife Pala. They were brought together by Doug Congrove and his girlfriend who arranged for Bart and Pala to sub at the same time on their bowling team. Says Bart, “You couldn’t ask for a better Brutus partner than Doug.” Bart and Pala celebrated their 24th wedding anniversary this year! Their daughters Hannah and Grace are in high school. Bart recently took Hannah to Ohio State to get her interested in joining the growing number of Suver OSU graduates. Besides Bart and Pala, there’s Bart’s sister, mother and uncle.  Bart’s mother, Sara Kadel Suver, pledged Pi Beta Phi in 1967. She probably couldn’t imagine that one day her son would be Brutus, who was created on the Pi Phi lawn in 1965! 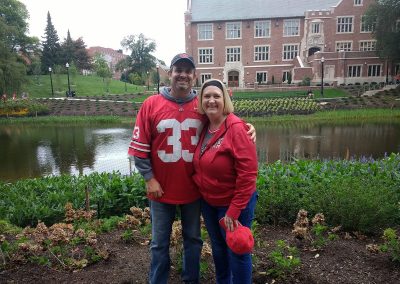 “My biggest fan and PR agent was my Grandma, who belonged to Ohio State Mother’s Club in New Carlisle area.”  Bart fondly recalls, “When we were at a restaurant, she’d announce to the server or diners she knew, ‘you know who this person is?’”  She bragged on all her grandkids, not just Bart. “Her goal in life was to be the best grandma she could be,” Bart says. “She was a unique soul–she was incredibly pleasant.  When she was dying, she was in the hospital for only three weeks, but had all the nurses crying when she died.” How does this affect Bart? He always tries to have a cheerful disposition.

Bart claims no background pertinent to becoming Brutus. He was not the Tecumseh High School mascot nor a gymnast. But he had always kept his eye on Brutus and “thought I’d give it a shot.” It worked out! “For me in general, I’m a quieter person, but when I put on the Brutus head, it would transform me entirely.” 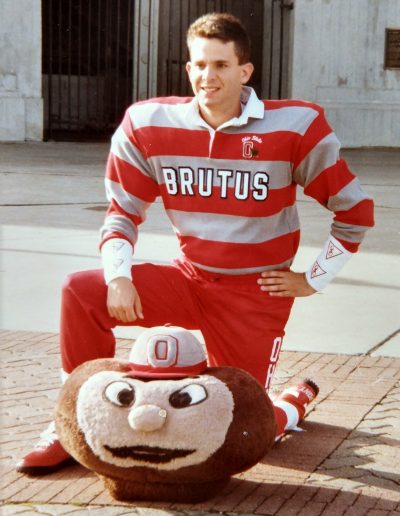 Boasting a double major of accounting and finance, Bart started out in a public accounting firm, then snagged a job in 1996 with YASKAWA, robotics manufacturer with headquarters in Japan, where he is Chief Business Analyst responsible for strategic planning, process improvement and  finance for the Insurance, Credit and Collections Group. He is a Six Sigma Green Belt and working on a Black Belt project.

Despite working for a Japanese firm, Bart and his family continue to live in New Carlisle, on acreage formerly owned by his grandparents and shared with several family members. Their lives focus around their jobs, family and 4H (barns and animals). Pala is a Title 1 elementary school teacher. The couple enjoys watching Grace play volleyball. Hannah has bowling in her DNA. Bart admits, “She’s a much better bowler than I ever was.”

Bart still has a sense of fun and adventure. After he and Hannah finished the guided Ohio State walking tour, they rented scooters to cruise the rest of the campus. What’s next? A licensed pilot, Bart’s goal is to build his own airplane so he and Pala can travel to away games. He estimates it will take five years to build! After that, look for Brutus to be airborne!