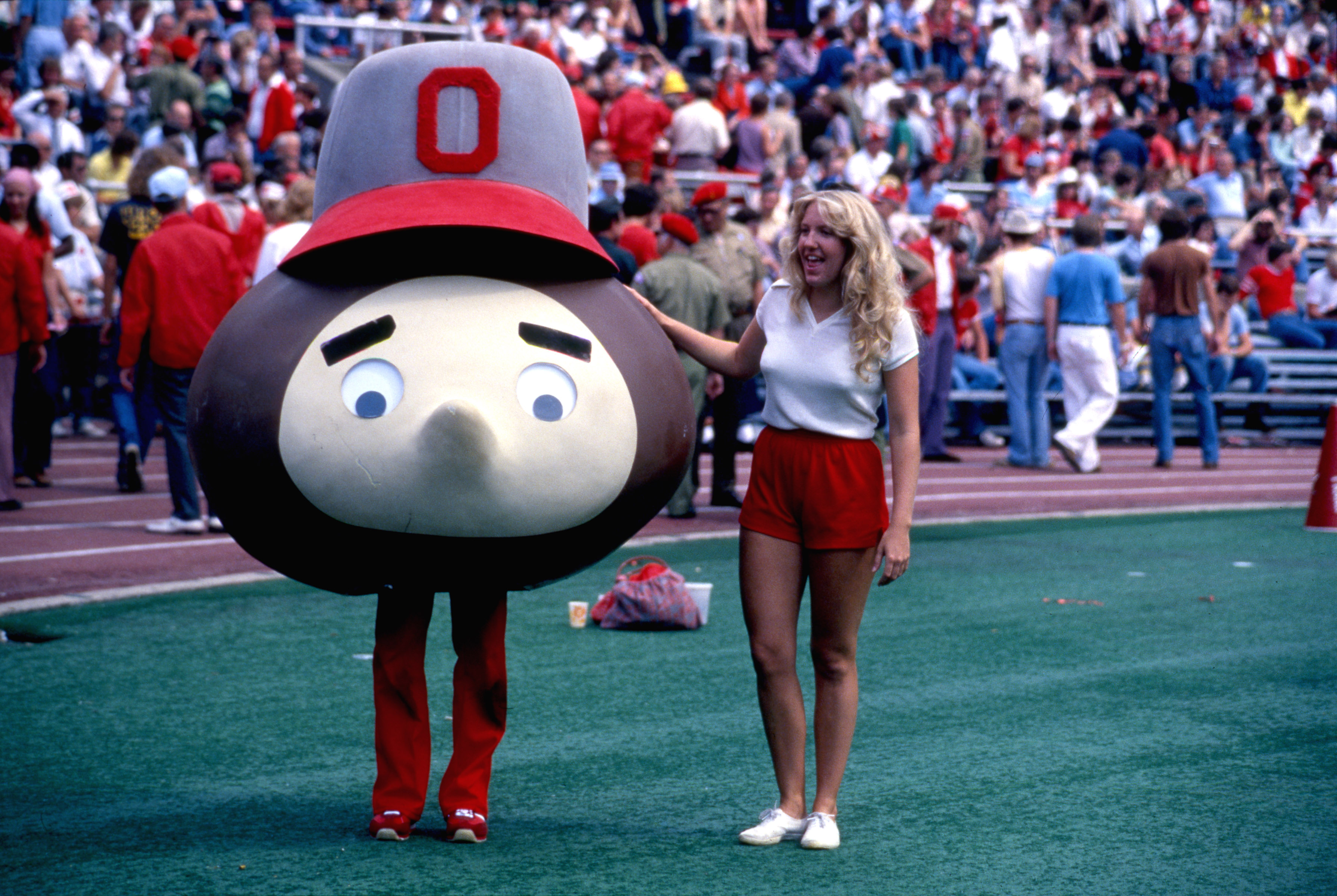 Brutus captured her heart from the start. As a high school student at her first OSU football game, Sandy Glowacki couldn’t take her eyes off Brutus and the cheerleaders.  She admits, “I remember laughing at Brutus when he would move his bushy eyebrows. I remember just watching and watching him.”  She had no idea of ever being Brutus. Her Whetstone High School mascot Brave had always been played by a male. The same was true for Brutus since his creation in 1965.

With nary a thought of being Brutus, Sandy went about following her bliss: sports. A self-declared “tom boy,” Sandy says her childhood was filled with “always climbing trees or trying to find someone to run a foot race with me.” She didn’t let lack of formal lessons stop her. She observed athletes on television or in person. The outcome? She excelled at gymnastics, tennis, water skiing and softball (as a pitcher no less!).

Sandy’s love affair with cheerleading began in high school. With the goal of making the Ohio State cheerleading squad, Sandy worked on her jumps, gymnastics, dance and general cheerleading moves for the annual spring tryouts. She tried out her freshman year. She ALMOST made the team. She tried out her sophomore year. She ALMOST made the team. Both years, she and fourteen other females made Finals.  Both years, she missed the final cut to 8 women.

Spring of 1977 was Sandy’s last shot at making cheerleader. Again she tried out. Again she made Finals, but not the team. She was female #9.  “I was devastated when I didn’t make it.” Then assistant athletic director Richard Delaney invited her to a meeting in his office. He acknowledged how hard she had worked for 3 years and the energy and excitement she had for sports and the University. He said, “I want you to be Brutus.” Without hesitating, she replied, “Yes, I’d be glad to!”

All these years later, Sandy reports, “I can’t tell you how thrilled I was.  I just really never expected to be asked.  It had always been given to the next male in line.”  Besides the honor, Sandy said, “I also felt a great deal of responsibility!  Not only did I want this new Brutus to be accepted by the Buckeye fans, but I also wanted to do a great job and to help pave the way for other females.” 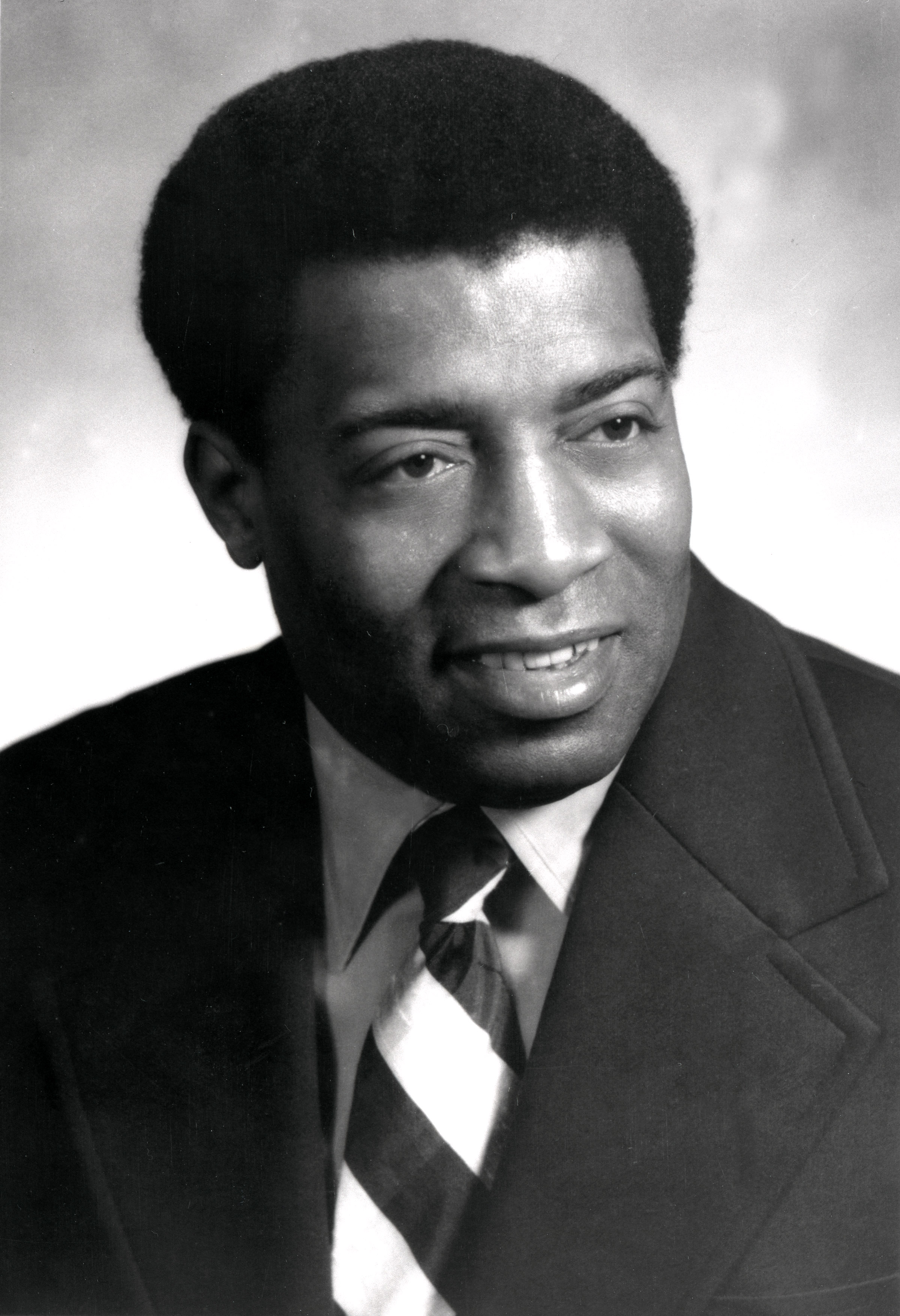 Dr. Delaney orchestrated two major changes the fall of 1977 – the first female Brutus as well as a new costume, a new big head with a Woody Hayes hat. As many launches go, revealing the new Brutus had some hiccups. The first one was at band practice prior to the first game of the season on September 10.  Delaney introduced the new model to the band, then Sandy leaned it over and crawled out on her stomach. She stood, her long blonde hair hanging down her back, expecting cheers or applause. Silence. As Delaney and Sandy walked off the field they looked at each other and said at the same time, “That didn’t go over very well!” 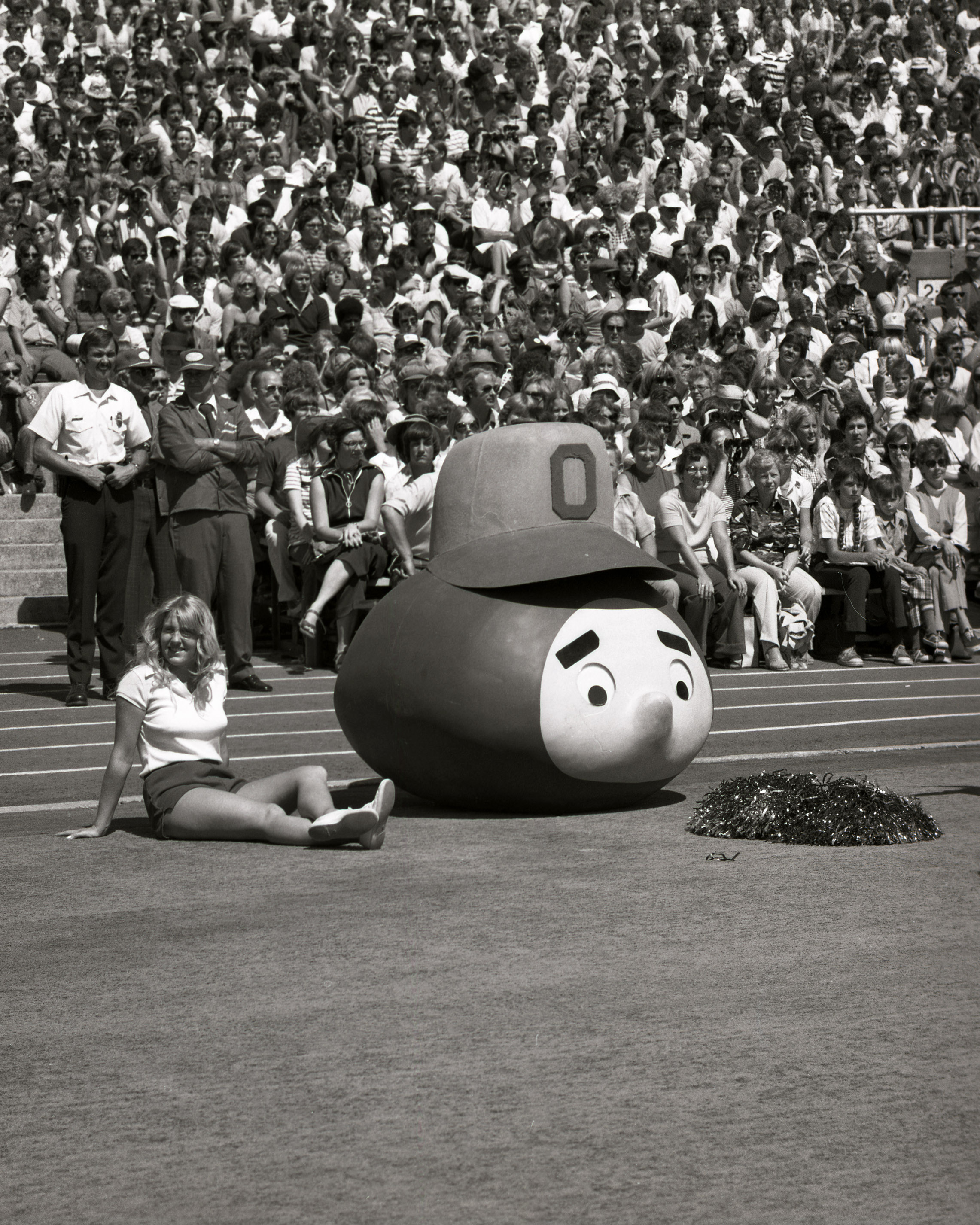 The second launch misstep occurred in the skit used to introduce Sandy as Brutus at the football game. Dressed up as a University of Miami player, she was chased off the field by a person wearing the Brutus head. She came back on the field, minus her Hurricane outfit, to welcoming cheers. Unfortunately, the person in the Brutus head left the field bloodied from bouncing around inside the head. Sandy said, “He never came back.”  A design flaw had become all too apparent. Two handles inside the base of the head were meant to allow the person inside to carry the head. It might have worked if Brutus stood still the entire game. However, as soon as Brutus started to move, it took great effort to keep the head balanced. In fact, according to Sandy, it was impossible. By next game, harnesses similar to the 1965 papier-mache and fiberglass models were installed. Together with the handles, Sandy learned to walk with the head.

It was hot for the first game, so Sandy decided to wear shorts. There was no prescribed Brutus uniform. Sandy quickly realized that bare legs sticking out from the head was not the best look. She subsequently switched to pants. 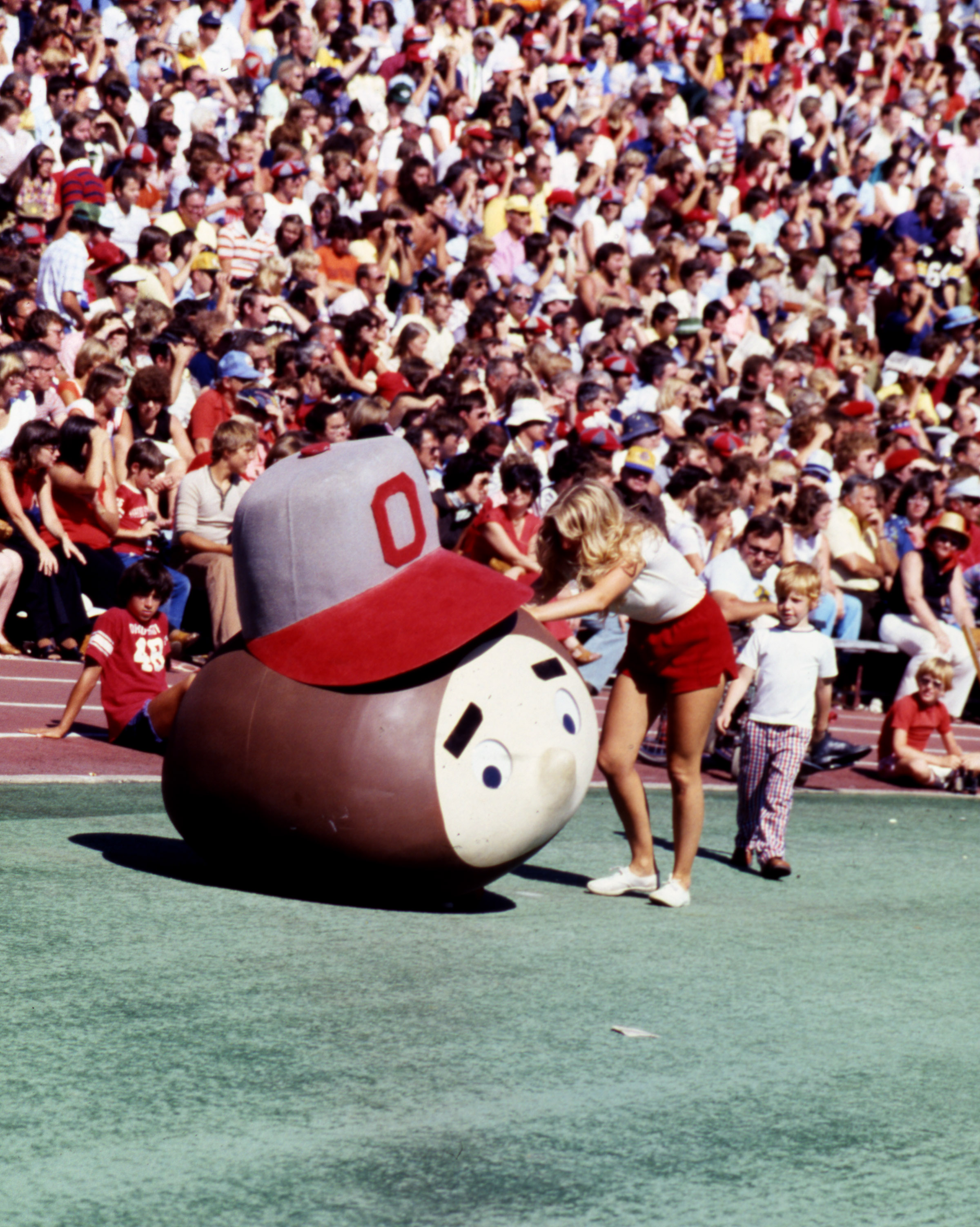 Although the model was built with the idea of being lighter weight than the prior fiberglass big head, Sandy testifies that it was not. “I think it must have been 85 pounds, maybe more.” Her mom repeatedly told her, “I worry about you carrying that thing.”

Sandy and Sam Lurie, who replaced the bloodied Brutus, switched off wearing the head during games. Brutus had a limited career during Sandy and Sam’s tenure. The head was kept under the stadium and transported to the end zone on a truck. Sadly, Brutus couldn’t attend basketball games or make visits in the hospital. He was too big to get through doors!

The extent of Brutus’s antics at games was to walk around the field on the 8-lane track.  When Sandy and Sam reunited at Brutus’s 50th birthday celebration in 2015, she said to Sam, “Who would have thought Brutus would be where he is today?”

I asked Sandy whether she ever put being Brutus on her resume. She said, “Yes, it catches their eyes.” Sandy shared, “Being Brutus helped me to learn that I loved working with children.  As Brutus, I would have fans bring their children down to me on the field during a game and kids would just light up!”

Sandy never did pursue her major in Fashion Merchandising. Prior to graduation, she worked for Dr. Delaney in the Athletic Department where her favorite project was a 5-week summer experience for 600 inner city kids. She learned she loved working with children! After graduation, Sandy worked in the OSU Graduate Office for a year, then coached and taught gymnastics and cheerleading at the high school level and in private gyms. For a while, she helped judge Brutus tryouts and was camp counselor. She currently substitute teaches for Wellington School in Upper Arlington, where she recently shared several photographs of herself as Brutus to the kindergarten class. Their reaction? Silence. But this time a much better silence than her unveiling to the band in 1977. Silence tinged with awe! 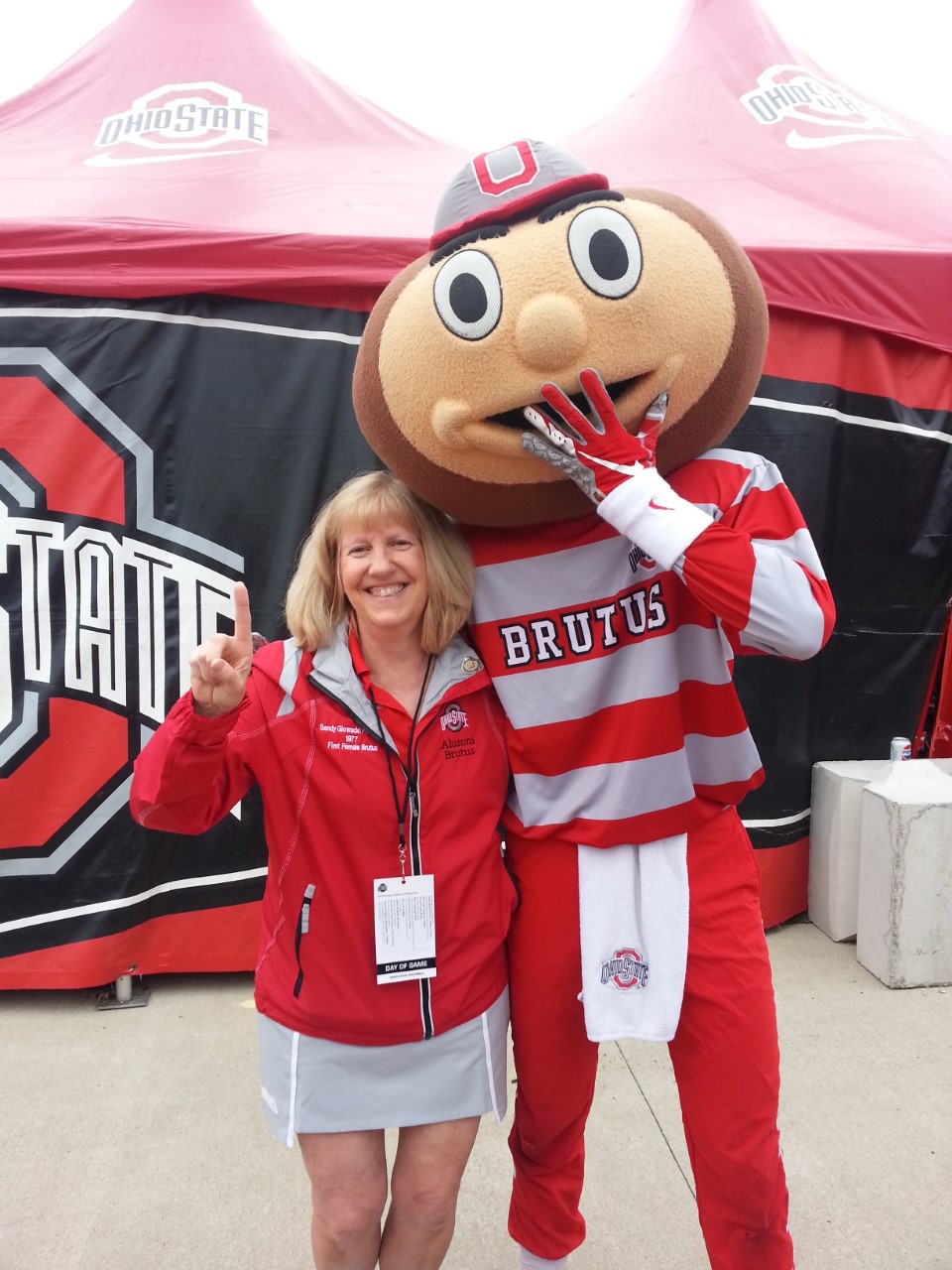 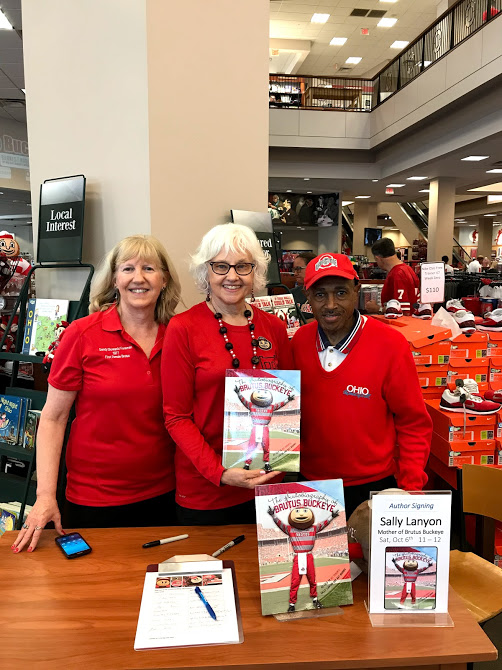 Sandy said something I never expected: “Being Brutus really helped me with my shyness!” She explained it was because she met so many people, including all the coaches. Her biggest thrill was encountering Woody Hayes in a corridor and having him greet her with an enthusiastic, “Hi, Sandy!”

Sandy claims to have been known as “the shy blonde hair girl” as a youth. The blonde part is self-evident, the shyness no longer is. When Sandy came to the Barnes & Noble book signing this past October, I was the shy one sitting behind the table. Sandy repeatedly took it upon herself to approach a group of people looking at books or memorabilia and say, “Did you know that lady over there created the first Brutus?” As the shoppers approached the signing table, I’d say, “And this lady was the first female Brutus!”  From my experience of her, I would never have put “Sandy” and “shy” in the same sentence! All I could see was that same energy and spirit Dr. Delaney witnessed in her years ago.

Being Brutus changed the career trajectory of Sandy’s life, but not the joy. What makes her happy? Being with family is #1–whether it is vacationing with husband Eric and their son and daughter, their spouses, and grandchildren and granddog, or watching OSU football with her 87-year old mother. Right up there is attending Brutus/cheerleading/band alumni games. Sandy has only missed two years since her time she started attending in 1987, and those were due to 96-98 degree heat and a rain storm. This past year, she delighted in meeting Anthony Violi, the 100-year old band member who dotted the “i” in Script Ohio at the Tulane game. Also high on the joy list is sports: slalom water skiing, kayaking, tennis, swimming laps, lifting weights, to name her favorites. 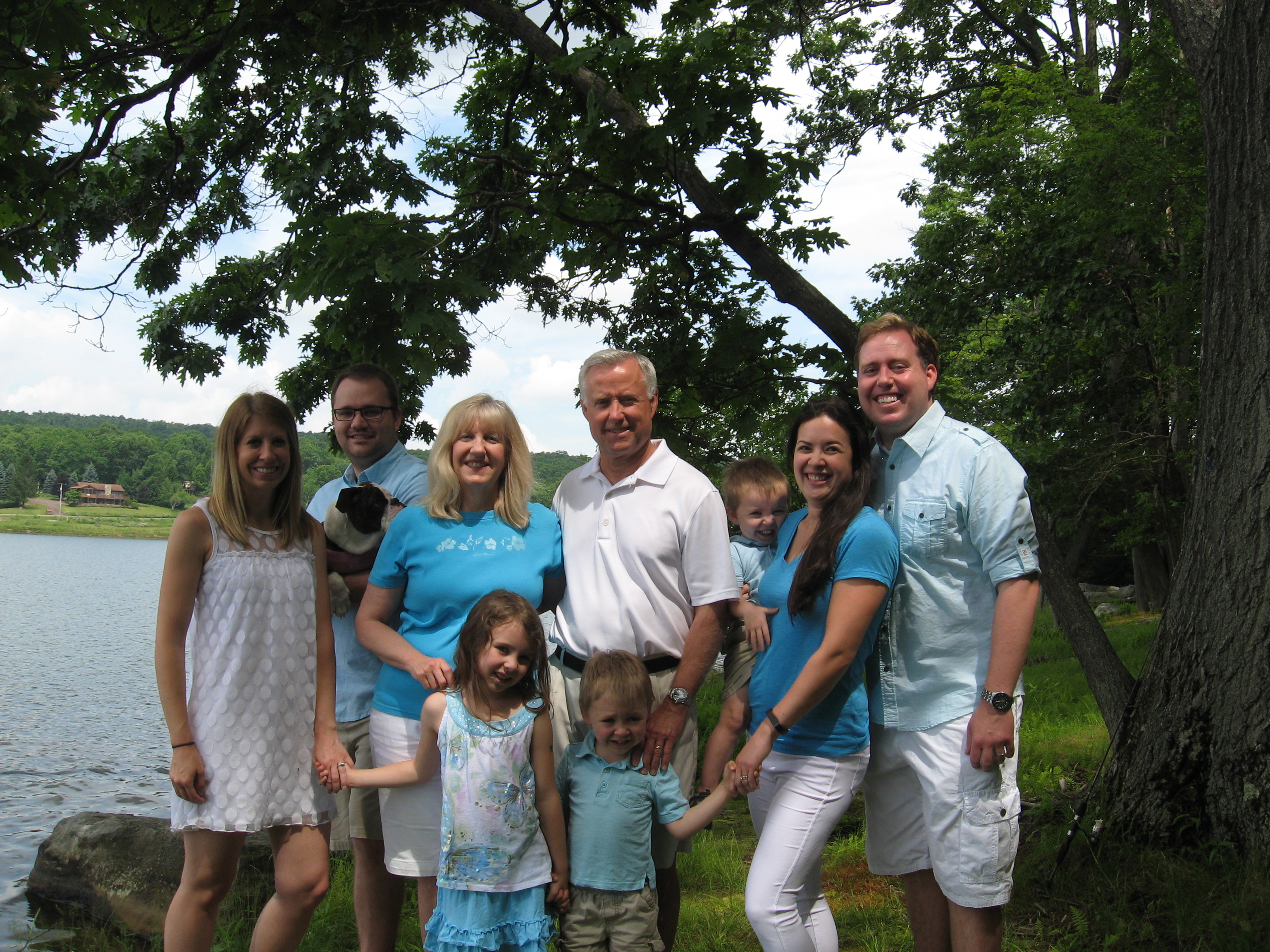 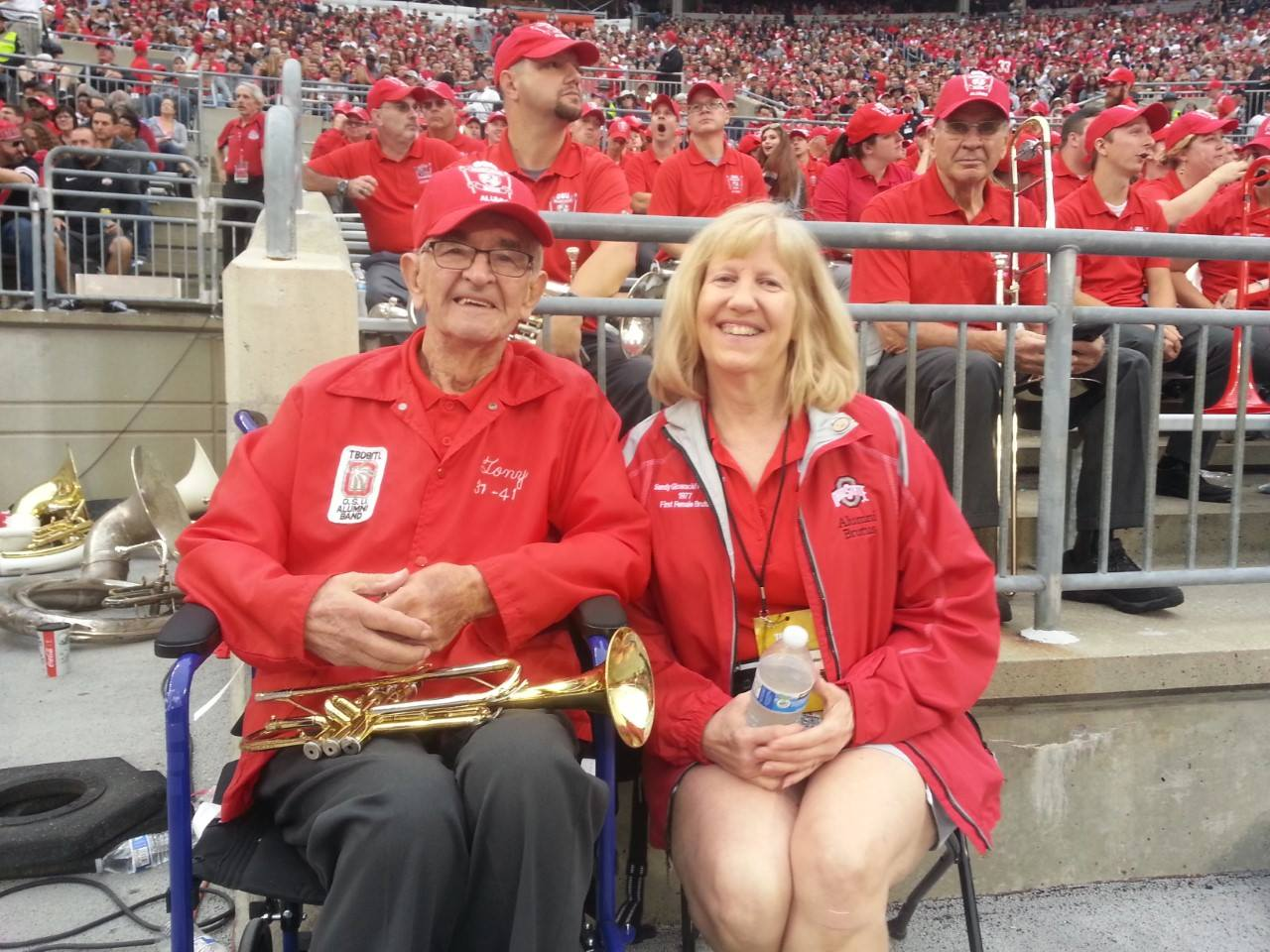 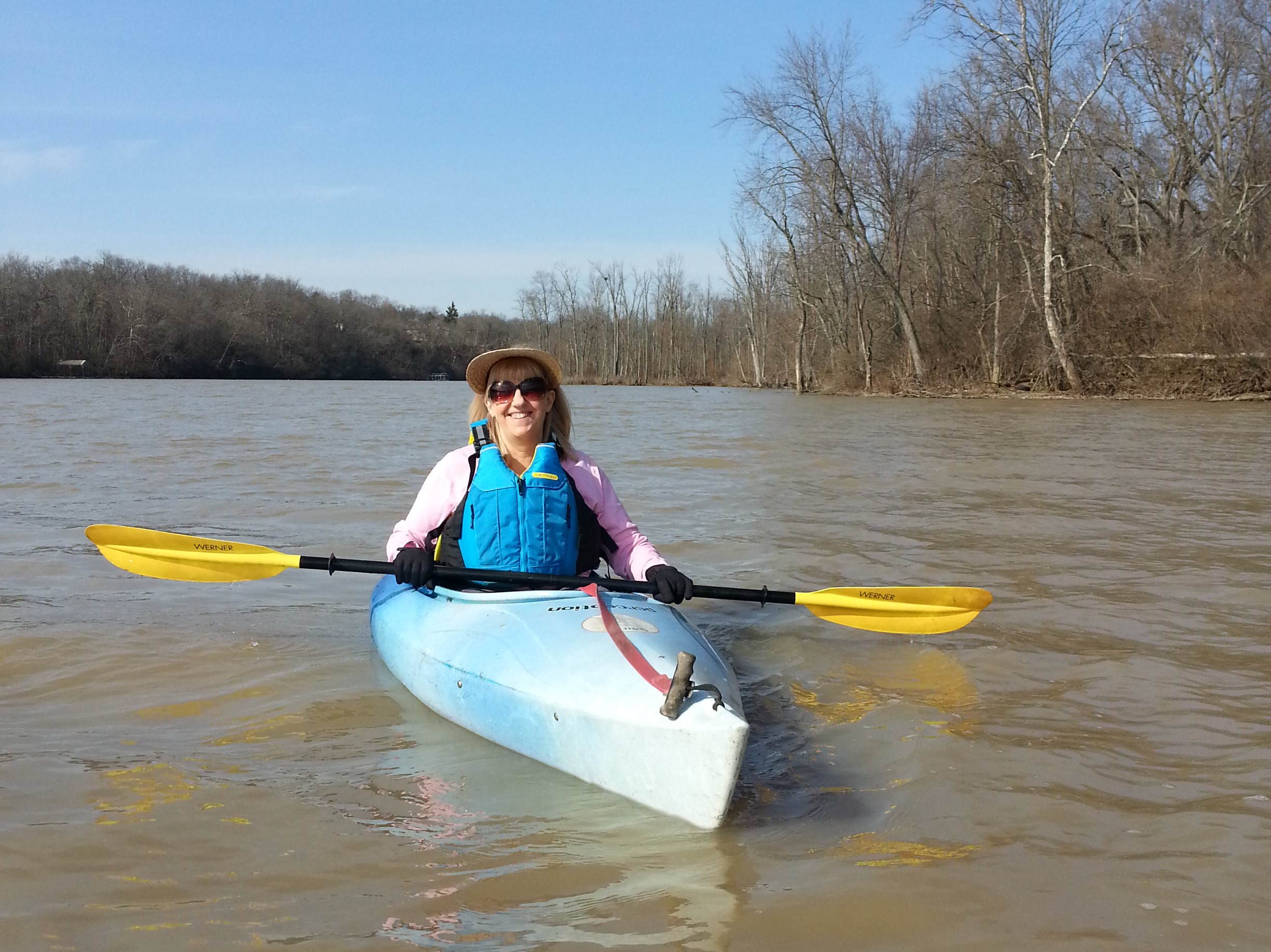