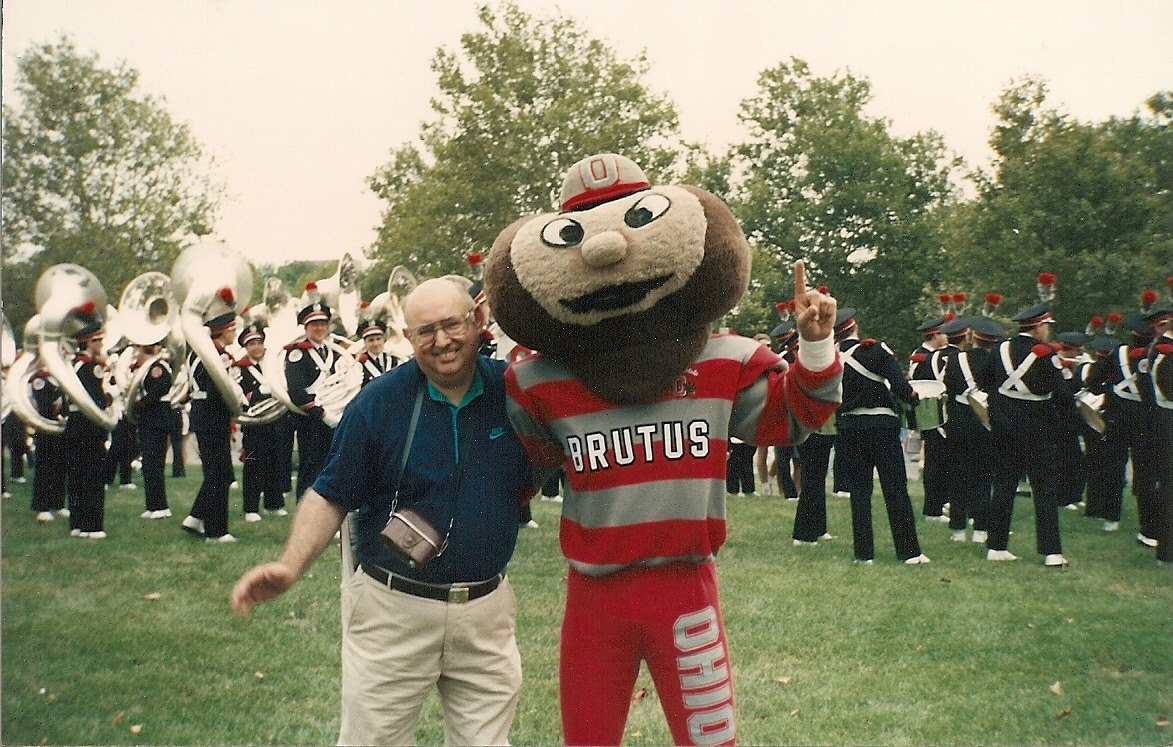 At the end of his freshman year at Ohio State, Doug Congrove’s parents, Joanna and Gary, looked at his grades and said, “You need to stop having fun. You did so well in high school.” Indeed, he had been a standout at Jackson High School in southern Ohio. An Eagle Scout, Doug played football and basketball and got the school record in the 4 x 100 relay in track.

Doug heeded his parents. He joined Ohio State’s Crew Team, a sport he’d never done before. He stopped “goofing around” as he calls it, and his grades improved. Then he met Kyle McQuaid, Brutus, to whom he complained about all the conditioning involved with Crew.  Kyle said, “Why don’t you just try out for Brutus? You get a front row seat at games, travel, and you get to hang out with all the pretty cheerleaders.”  Doug was all in. He focused on preparing for Spring 1990 Brutus tryouts with the help of cheerleaders since there were no tryout clinics then. 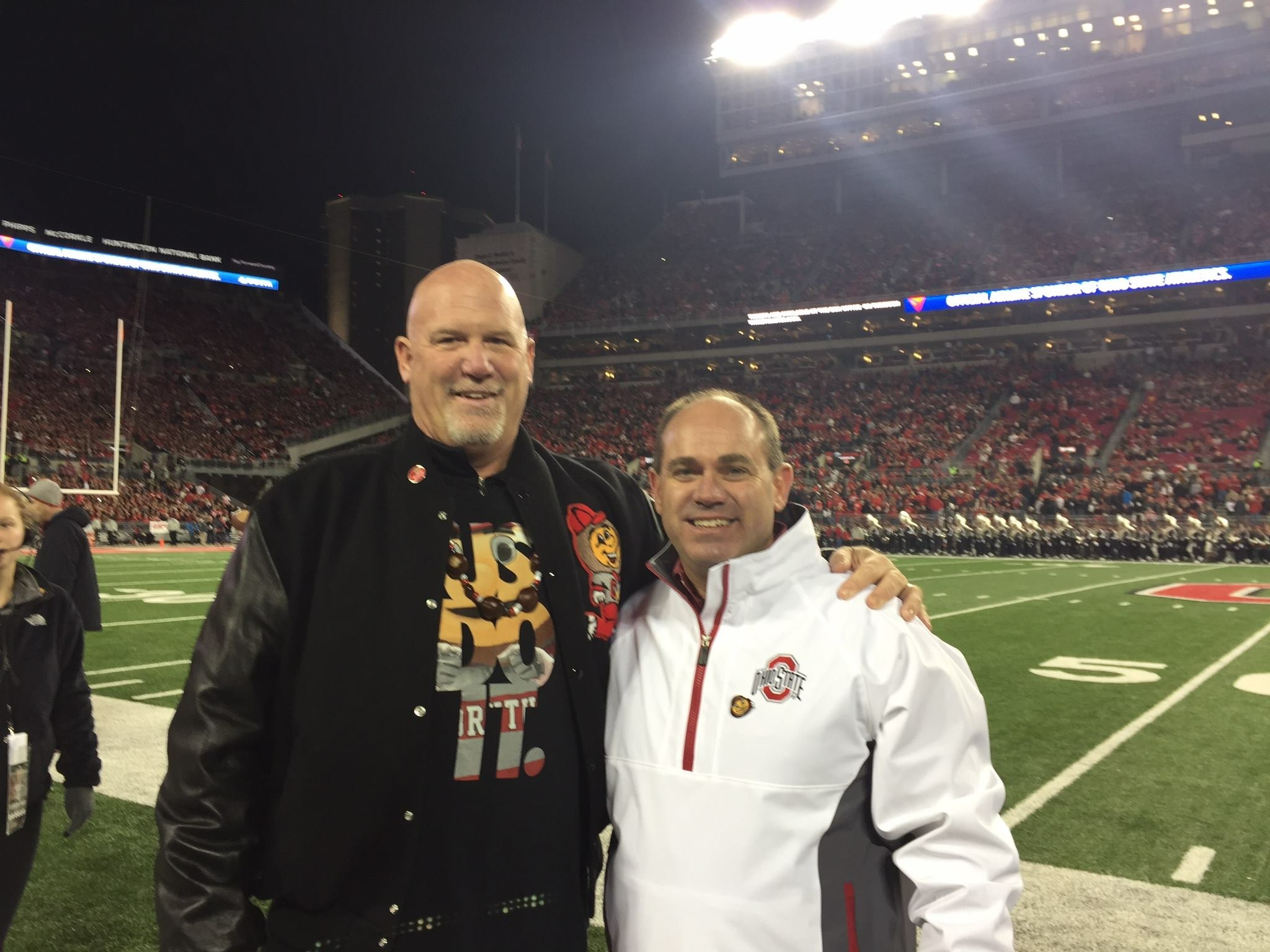 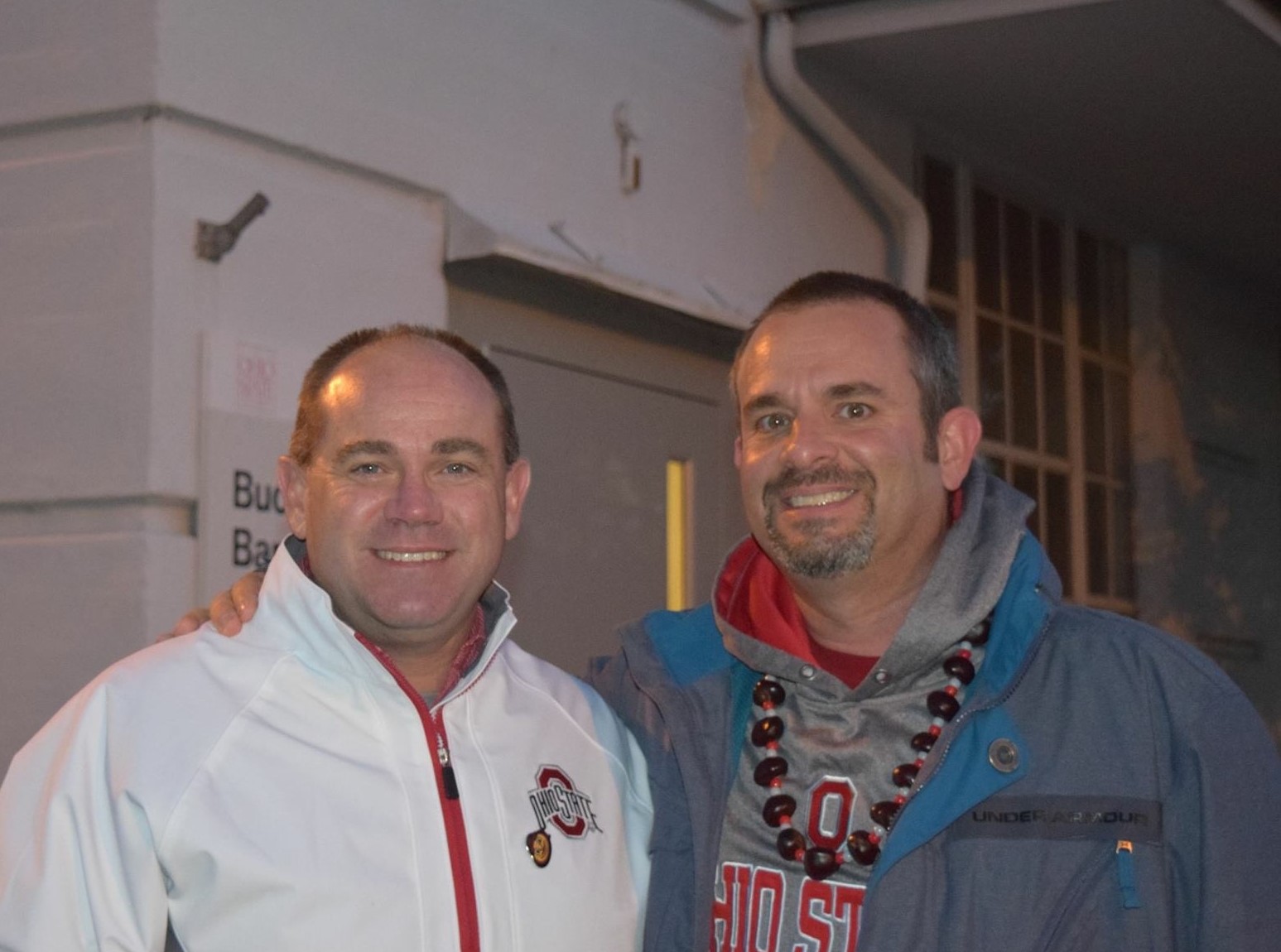 At a home football game against Wisconsin, Bart was Brutus the first half. When he came in at halftime he had blood on his face from getting hit really hard with a megaphone by Bucky Badger. Doug explains that mascots are not to be intentionally physical with each other. “It’s supposed to be pretend and as a general rule of courtesy the home mascot usually gets the upper hand.” Doug recalls telling Bart that he would take care of Bucky. The downside of being Brutus? Doug said that there was only one Brutus head at the time, and on that day, “the head did not smell good at all.” 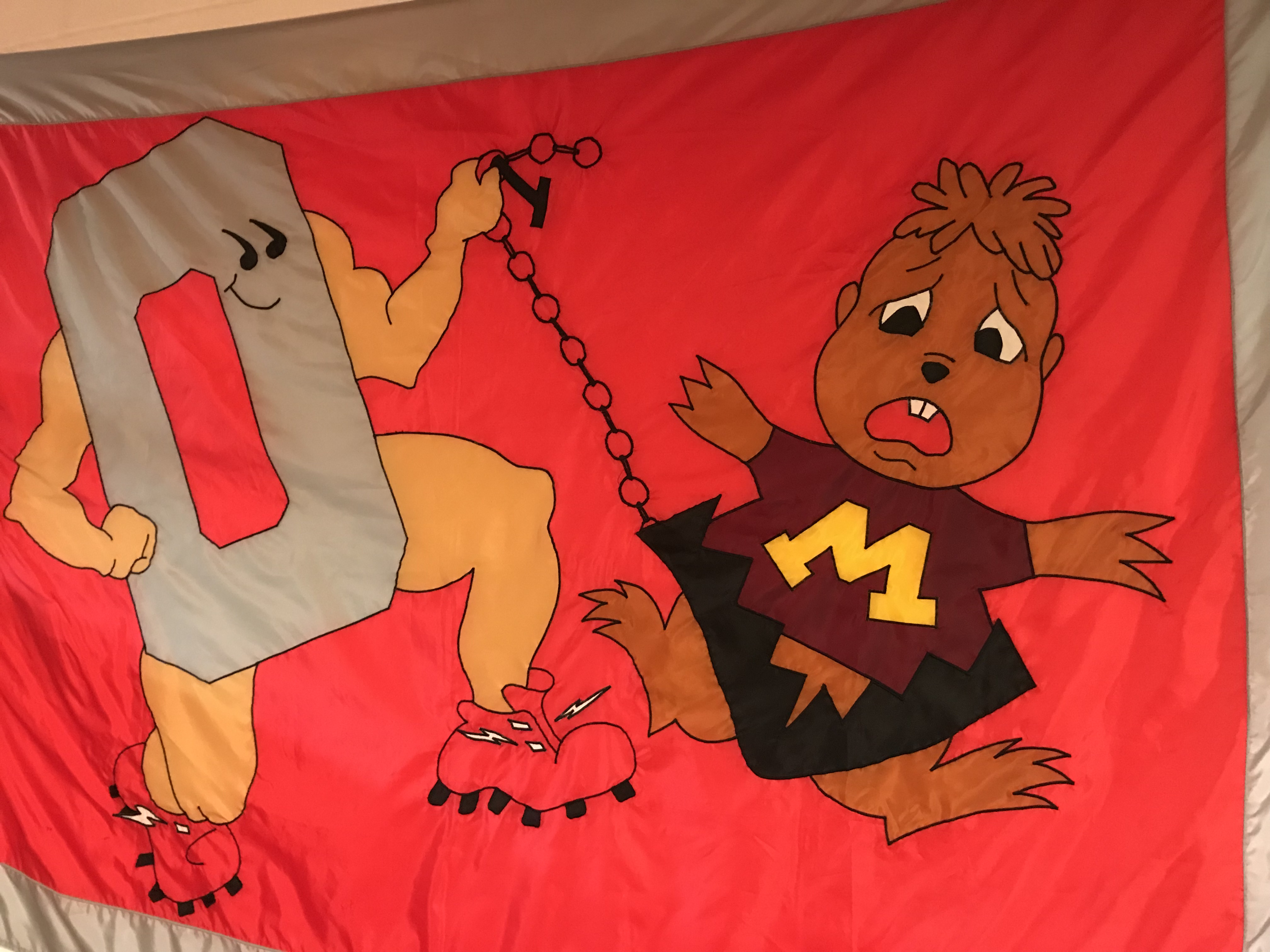 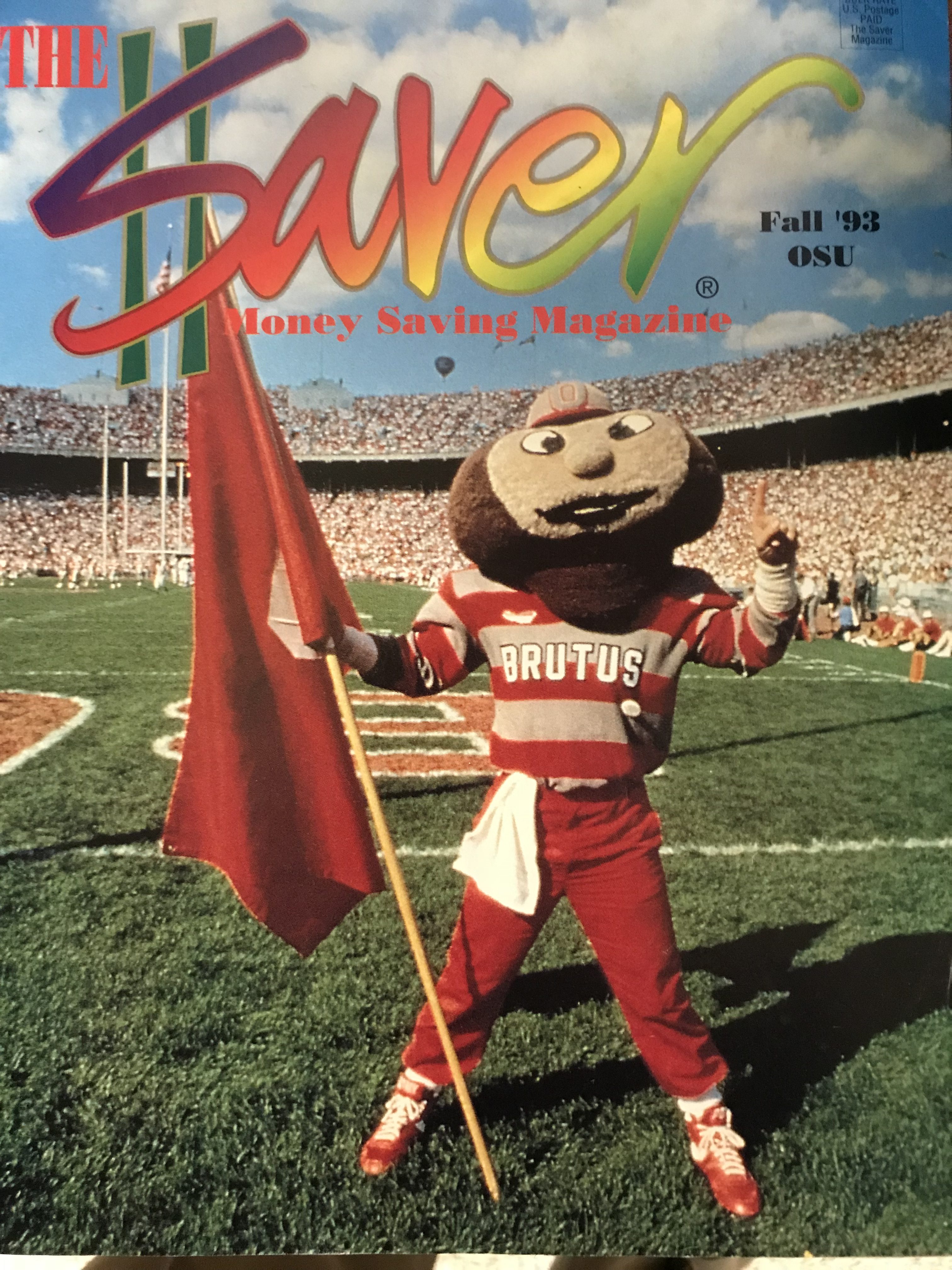 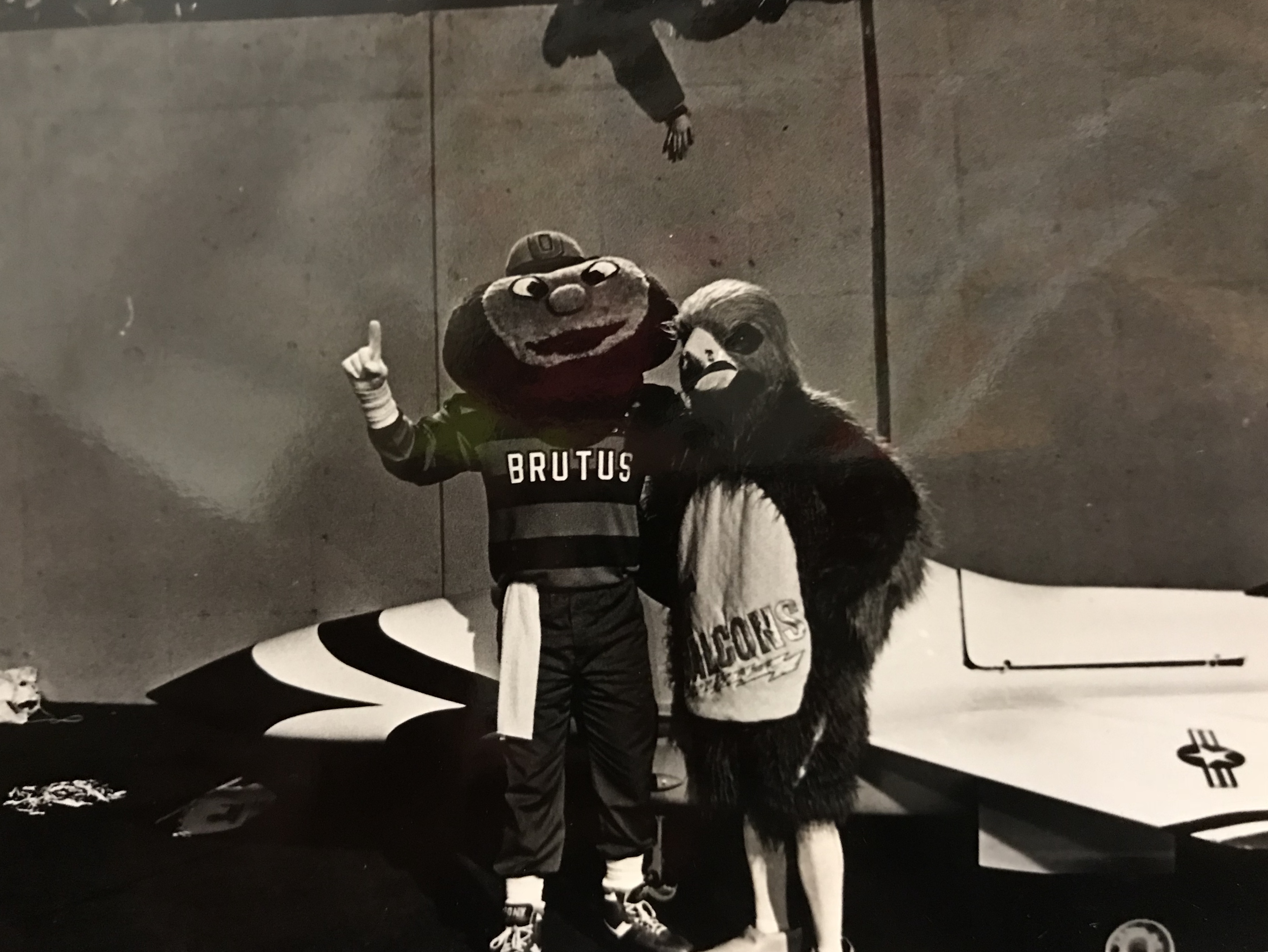 Doug had the enthusiastic support of his parents and the southern Ohio area around Jackson. Joanna and Gary attended every home football game when he was performing as Brutus and recorded every game on their VCR. They were proud when publicity about Doug appeared in The Mead Newsletter (Gary’s employer), The Saver, and an Air Force newsletter picturing Brutus with the Air Force Falcon at the Liberty Bowl. 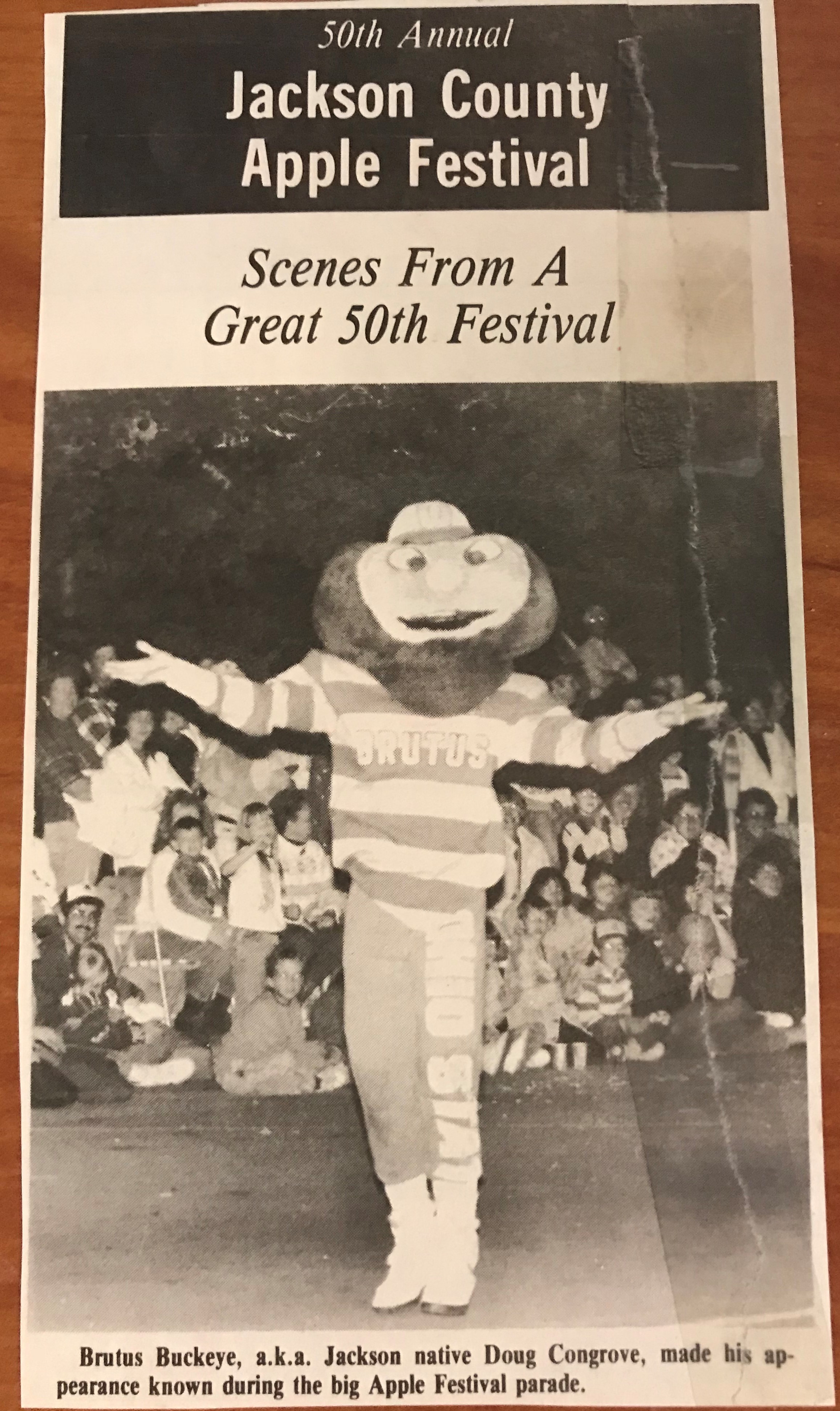 At the 50th Anniversary of the Jackson County Apple Festival in Jackson, Brutus and the Ohio State Marching Band appeared in the parade, the largest lighted parade in Ohio. The highlight of the event for Doug was having the opportunity to perform in his own hometown with his dad by his side (see photo at top of article) as his escort as he walked the parade route. 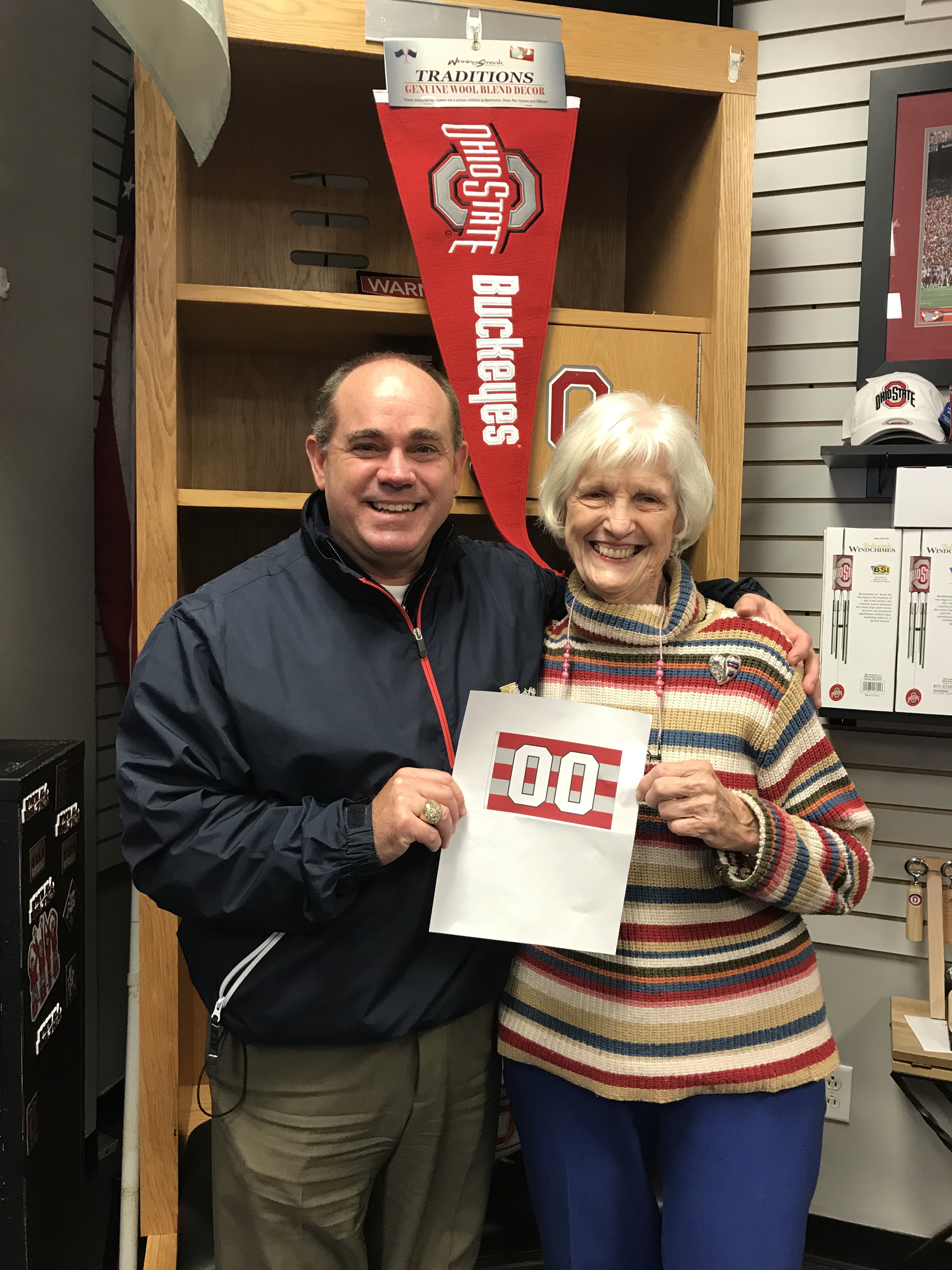 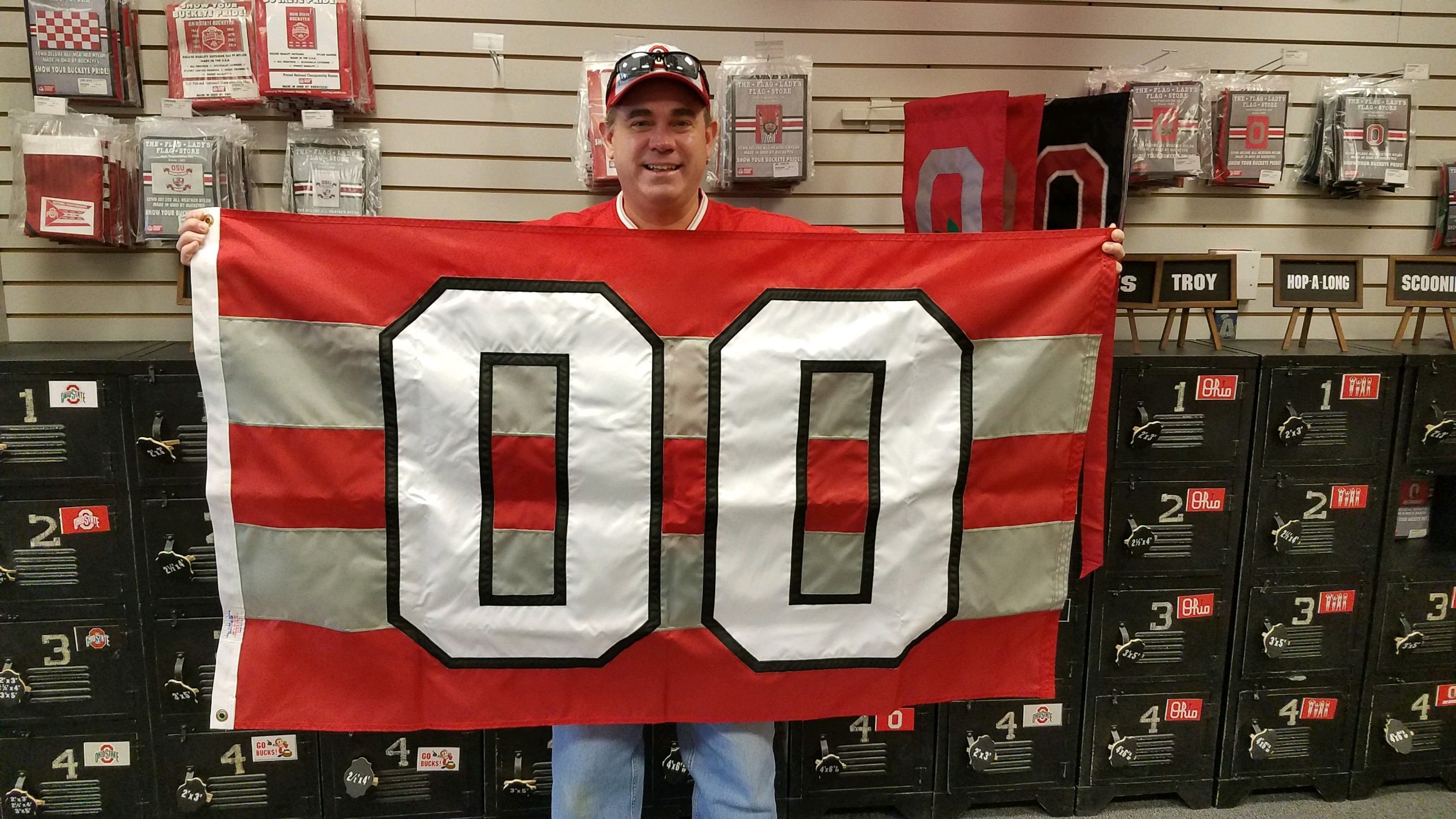 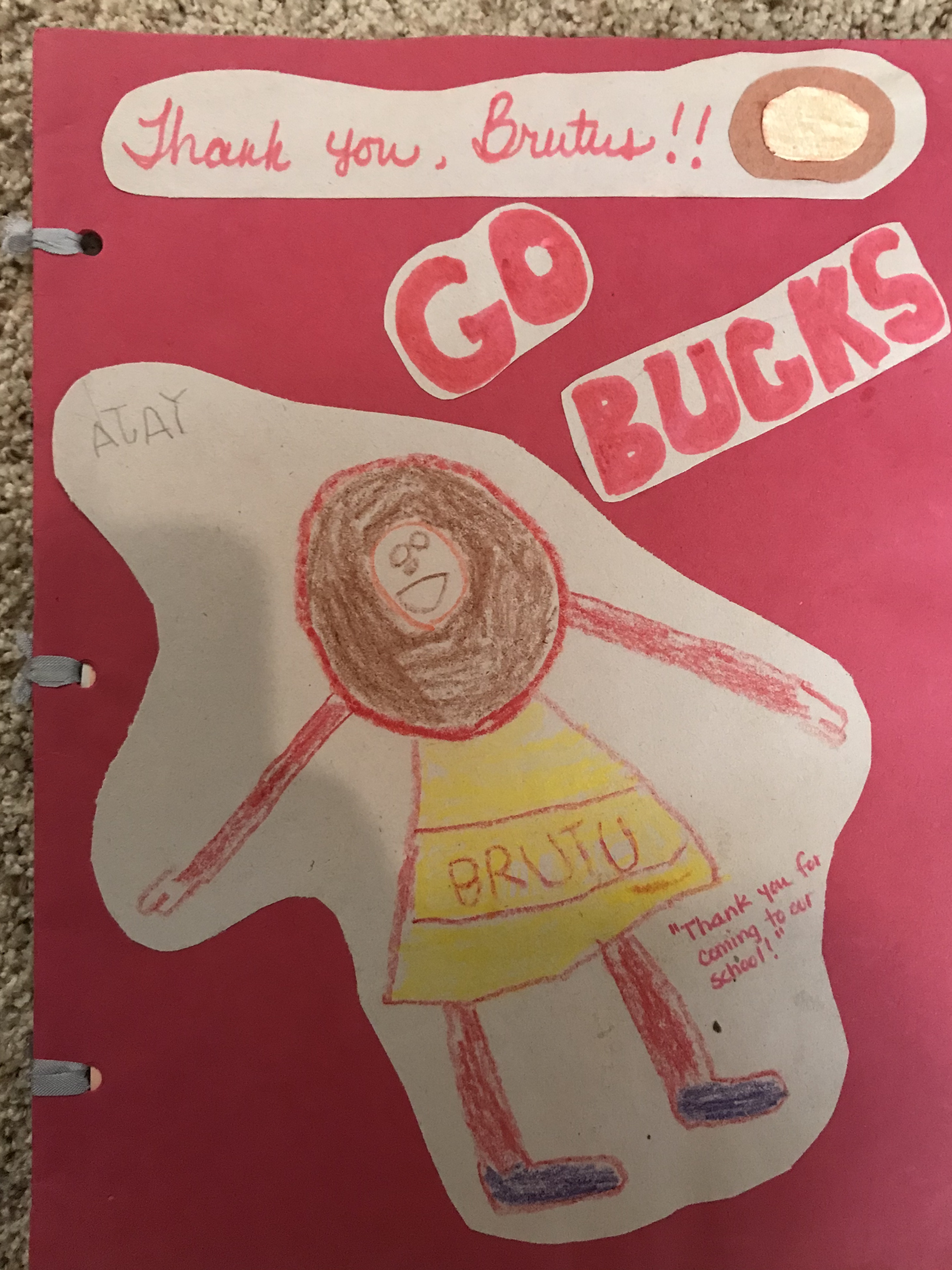 Each Brutus brings their own flavor to the “job.” Doug’s mark was with flags. Mary, the Flag Lady, who loves Brutus, would make a different flag for each home game. On Monday, Doug returned the previous flag and discussed ideas with Mary for the following game’s flag. On Friday, he would pick it up in his costume and wave it around in front of her store. Mary, who started the business from the trunk of her car, has been providing flags and anything flag-related for many years. Doug stays in contact with the Flag Lady on a regular basis and recently had her make him a Brutus custom flag for his tailgate.

Did you know Brutus gets fan mail? Back in the 1990’s, fans, complete strangers, sent photos and letters to the university marked “Attn Brutus.” Judy Bunting, in charge of cheerleading, would pass the letters on to Doug, who keeps them in an old Apple computer bag.

By Spring of 1992, Doug had lined up a job as a claims representative with The Personal Service Insurance Company. Even though it was an entry level position, he remembers having good benefits and a company car!  After three and a half years of learning the insurance business, Doug ventured out, creating the Doug Congrove Agency in Westerville, OH, which he still runs.

Doug was able to snag “BRUTUS B” for his Ohio license plate. Over the years he has many versions of the same plate and frequently gets a wave, a honk, or even an O-H from other motorists on the road. One of his “BRUTUS B” plates is displayed at the Longaberger Alumni House with other Ohio State-related plates.

Doug has witnessed a change in Brutus recognition. The 25th anniversary was a small gathering with no formal recognition for former Bruti. By the 40th, there was recognition on the football field during a game with fancy plaques. And the 50th was a big blowout with a year-long celebration culminating in a weekend of events on and off the field. (See October 1, 2018 Blog Post.)

Giving back is important to Doug. From 1992 to about 2008, Doug regularly helped with Brutus tryouts. For him, the deciding factor always came when the candidates put on the costume. “You can tell right away that some people are natural and to others, it’s not.” 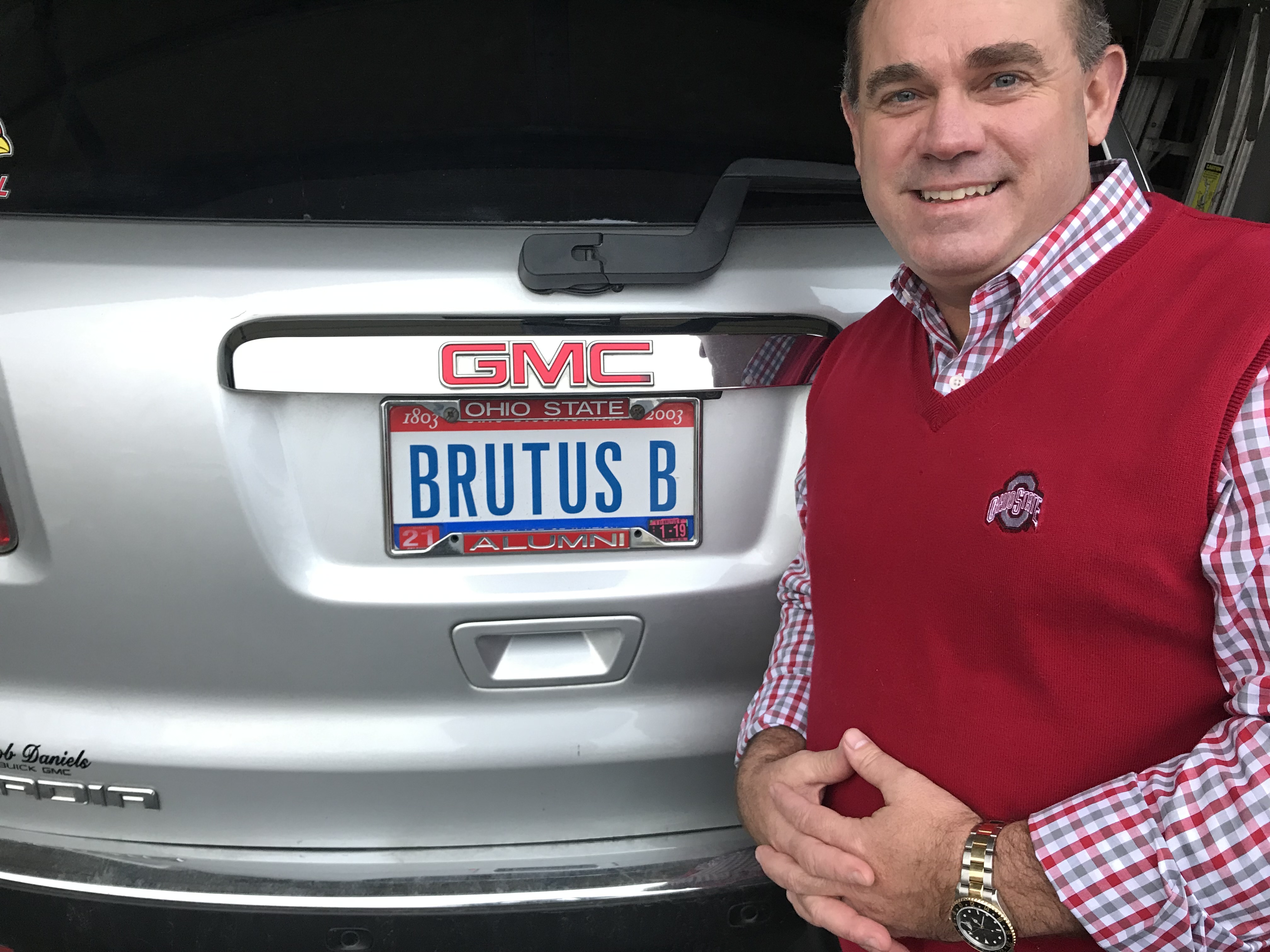 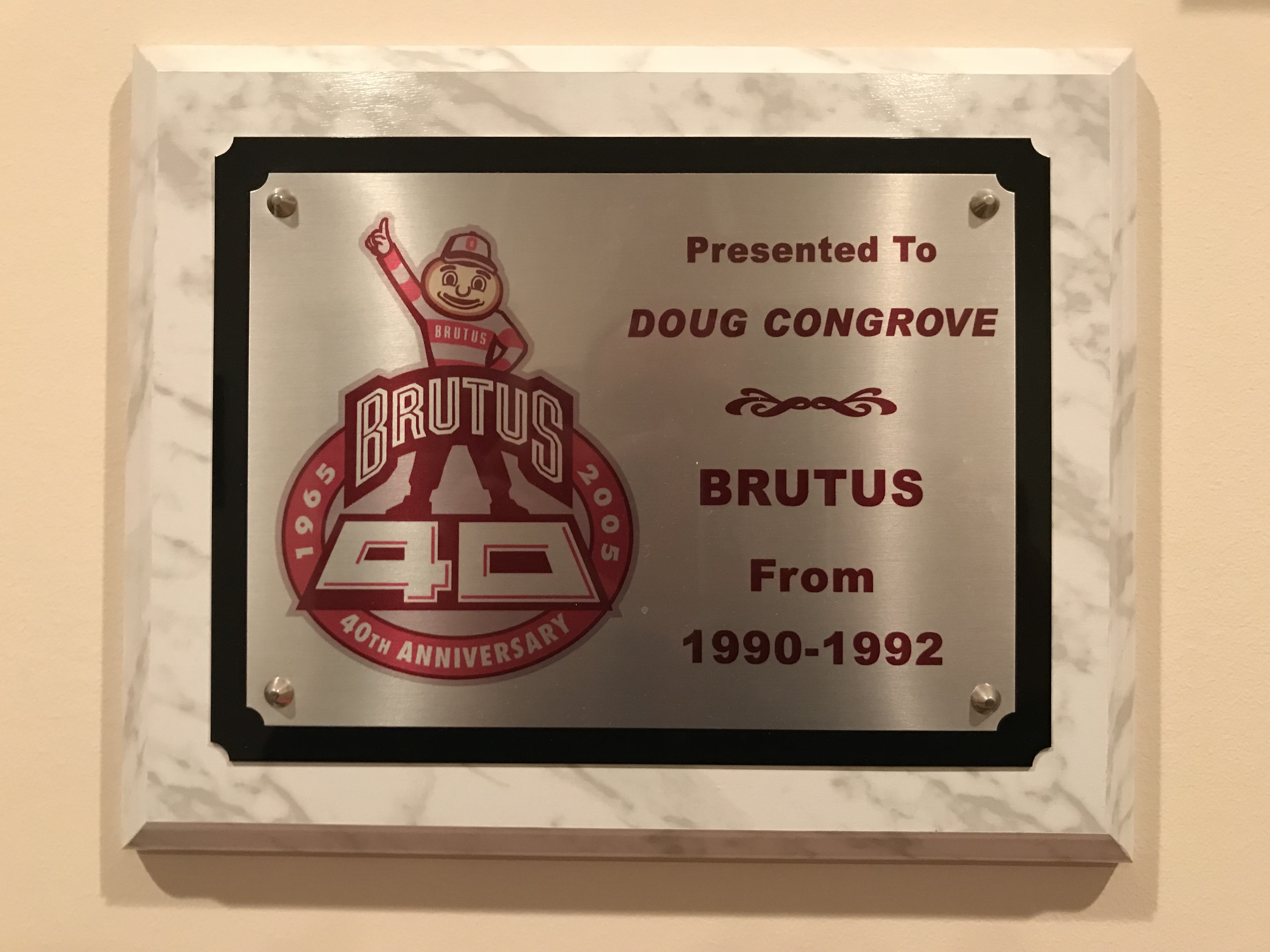 Doug is very proud of how Brutus has evolved over the years and says that he might have a hard time making the Brutus Team today as the bar has been elevated so high, particularly with the gymnastics. 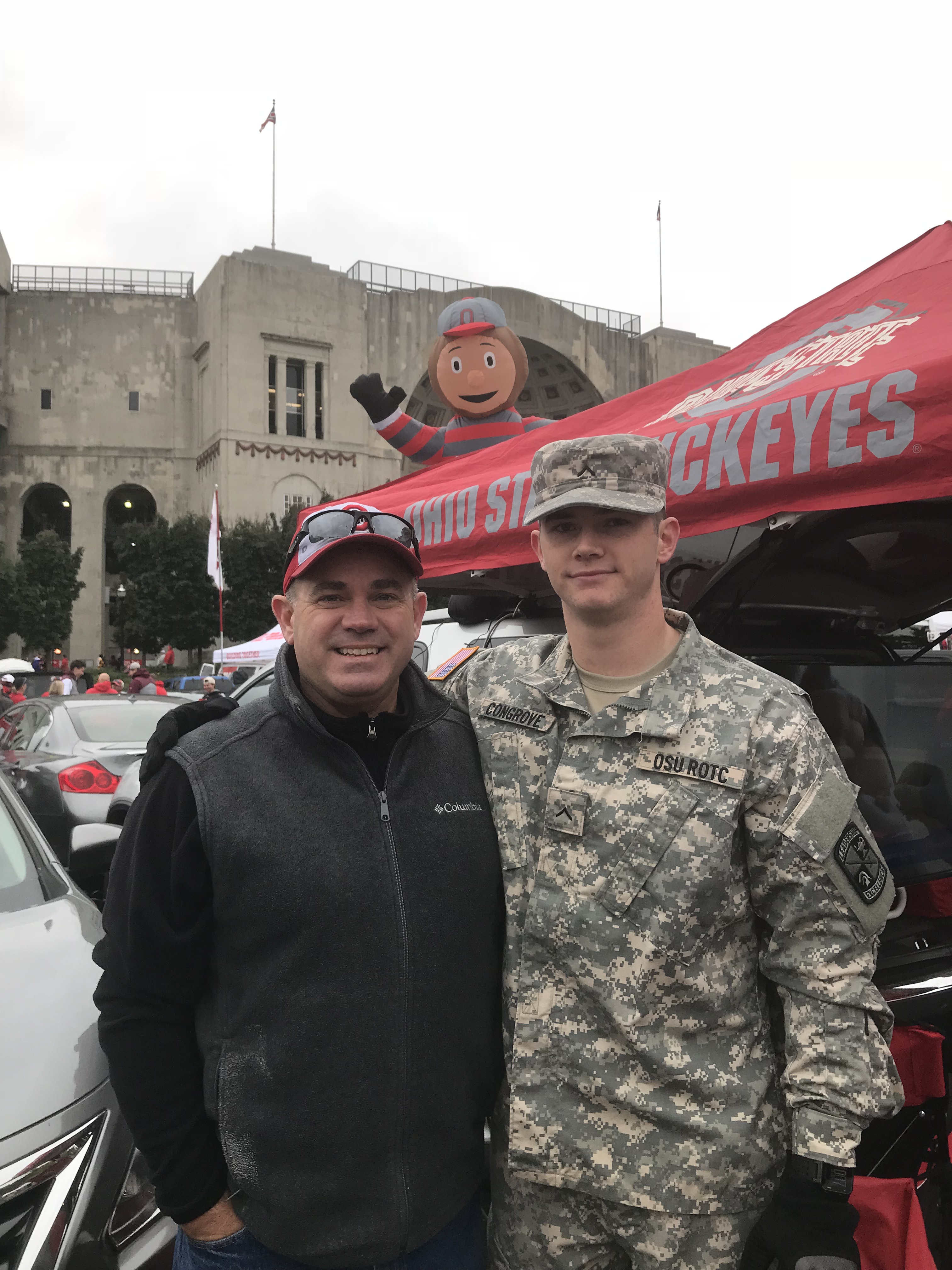 Family is a core value in Doug’s life. His son Max is a freshman in ROTC at Ohio State and Doug took Jackson, a freshman at Saint Charles Preparatory High School, to his first Ohio State-Michigan game this Fall. Doug notes that the face value of the ticket he had this year was $168. Doug has an OSU-Michigan ticket stub from 1990. The price? $15.75.  Dreaming, Doug says, “It would be super cool if one of my sons would become Brutus, as we would be the first father/son to be Brutus.” 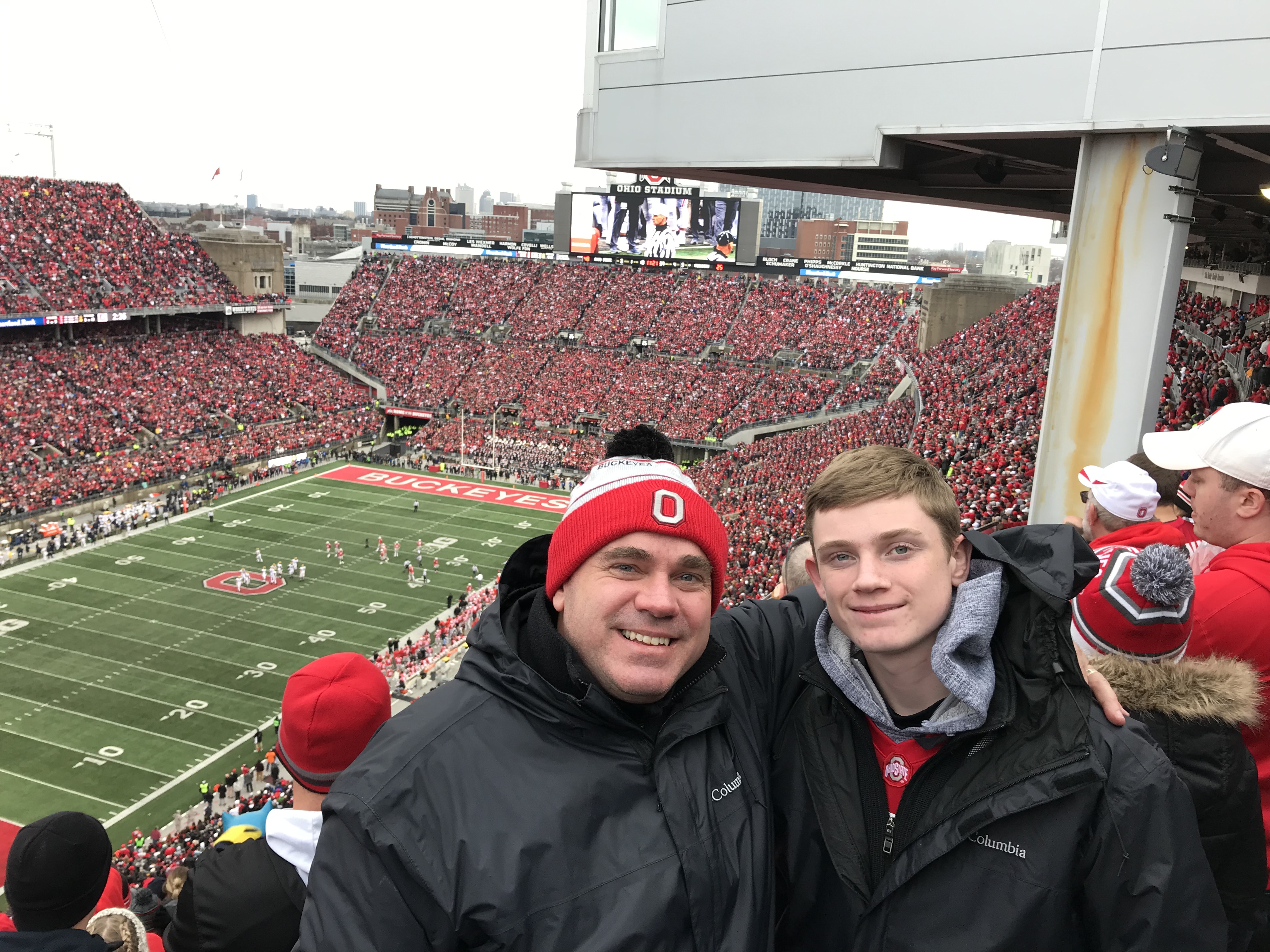 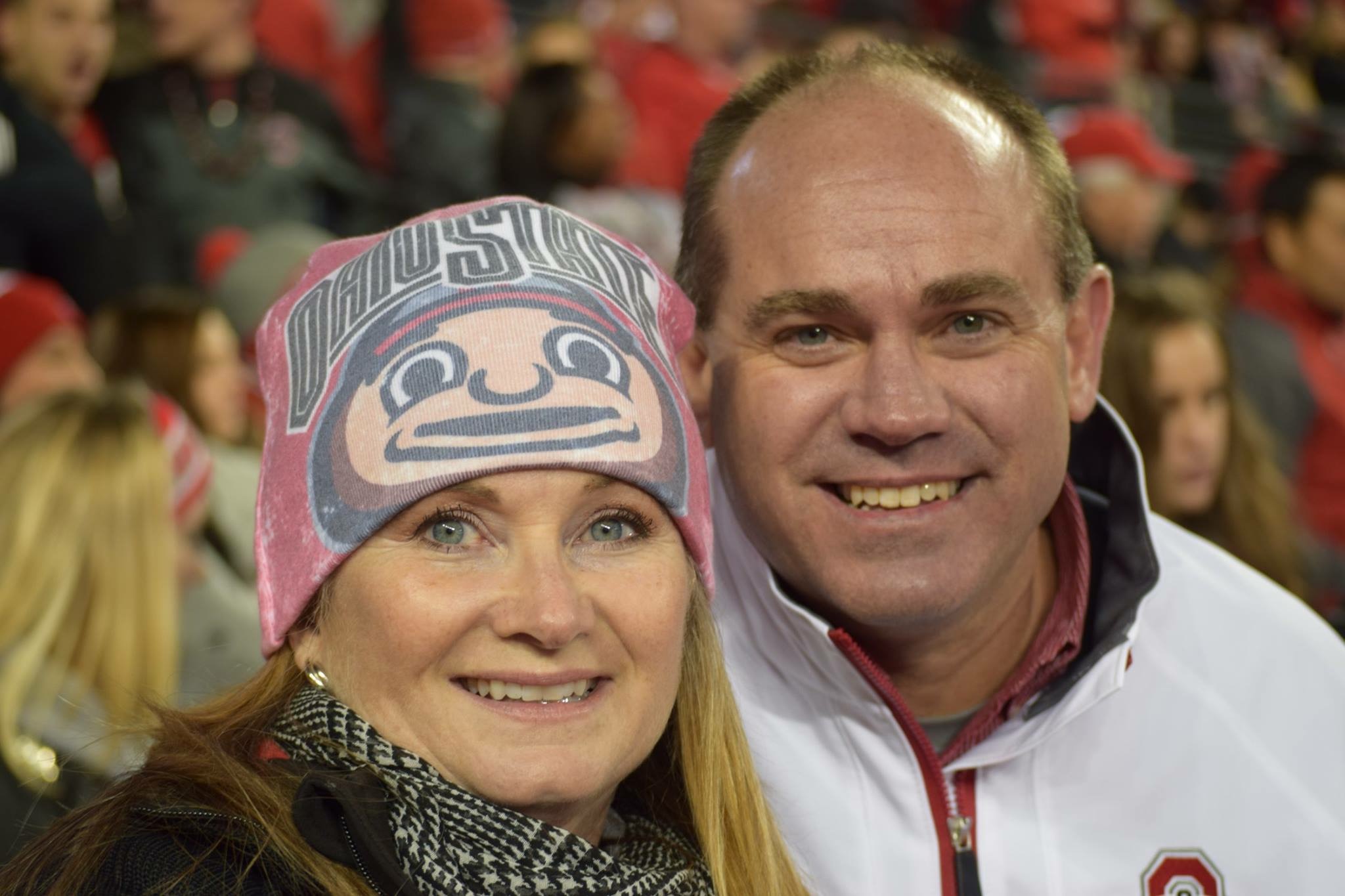 The Rest of the Story

I chatted with Doug’s mother Joanna even before I interviewed Doug. It went this way. At my 55th Mansfield High School reunion in October, one of my classmates asked me to autograph a copy of The Autobiography of Brutus Buckeye for her neighbor, whose son had been Brutus. I said, “How fun is that? Have her call me!”

Joanna’s voice betrayed her pride in Doug. She bragged about his insurance company, his wife who is an attorney and the two accomplished grandsons. Then she told me this, “When my husband Gary had Alzheimer’s, he would forget my name, he would forget Doug’s name.” She paused, “But he would always remember to say, ‘My son was Brutus Buckeye.’’’